John Lennon did NOT crash a wedding! 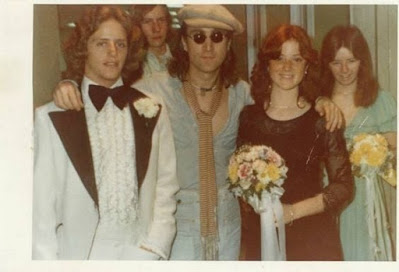 Time to squash a story that has been spreading around the internet for the past few years.   The story goes like this:

The story behind this photo is very interesting. John was doing one of his daily wanderings around New York when he came across a Wedding Reception in progress. John, being John, invited himself in and no one complained. He enjoyed the reception buffet and even joined the band playing for the wedding and performed a number of songs at their request. The bride and groom even had him join them for a wedding photo.

That is a nice story.   Just picture it -- John Lennon crashing a wedding and playing with the wedding band!   Wow!   Too bad it is just that -- a story.   There is absolutely NO TRUTH to this story!   Please do not believe this made-up story.

The truth is still pretty cool, but John didn't eat a buffet or play with a band.

This photo was taken in Philadelphia in May 1975 while John was in Philly for the  Helping Hands marathon.  This was written by one of the girls that worked for WFIL at the time.

Jay Cook, WFIL-AM Program Director brought us all into the recording studio to answer the phones for the telethon. We posed for pics with John Lennon & the following nite was Marple-Newtown's Jr. Prom. Sue Cook, Jay's daughter, is far right. Those were the days. Mrs. Cook had to tell us to stop following him as he was headed to the bathroom!

So there you have it --   there was no wedding.   There WAS a prom.  The program director of WFIL was at the prom and that is why John posed for the photo.   Yes -- I do think it is strange that the girls at the prom have bouquets instead of corsages, but it was the 1970s.  I don't get it.