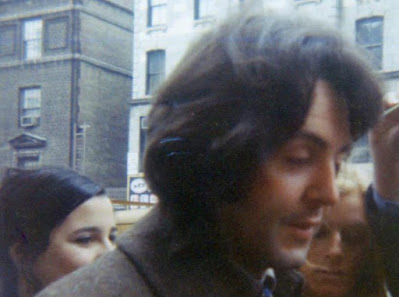 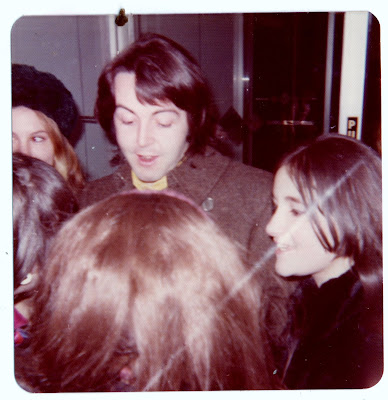 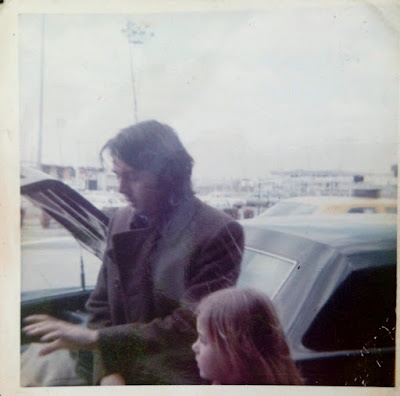 This story is from the Feb/March 1972 issue of McCartney Ltd. It was written by Sher Miller.   I know the photos I included are from Paul and Linda Honeymoon trip to NYC in March of 1969.  I do not know if these photographs go with the exact date of this story.

On a very cold, windy Tuesday afternoon in New York a group of us stood patiently (not really) waiting for Paul and family to arrive in front of Linda's former apartment house in upper Manhatten.  I remember standing staring down the street as a taxi came towards us.  Everyone else was busy talking but something told me to keep an eye on that cab.  When it was nearly at the corner I could see Paul's beautiful face in the light of the cab.  I grabbed my friend's arm and the rest of them group stood up.  Two girls rushed to the cab as it stopped and stood there as Paul, Linda and Heather got out.  I was a few feet from them.  Paul grabbed his suitcase (a safari bag) and he walked towards us.  I never noticed Linda at that time (or any other time) during their stay here.  In those days she would stand behind him, or walk away while he spoke to us.  IT was almost as if he wasn't married -- he still cared a lot about us then.

Anyway, as he passed me he smiled and said, "Hello.  How are you?"  I about fell over with surprise as I thought he must have remembered me from London just a few months before.  I said, "Congratulations" and he smiled again and thanked me, and proceeded to say "Hello" to just about everyone individually.  When he got to the apartment house door he stopped and accepted all our gifts.  Then all of a sudden a girl kissed him on the cheek, and since he didn't seem to mind we all kissed him too.  I remember holding his arm as I leaned over to kiss him on the cheek and how soft it was.  He was wearing a beautiful navy blue bell-bottom suit and white shirt.  His hair was shoulder length and shiny.   Then they went upstairs and my friend ran to buy 3 roses from nearby for him from us -- one for each of them.  She handed me the flowers and we waited for them to come out again.  It couldn't have been longer than one hour when Paul and Linda appeared at the door.  He gave us all a big smile and I handed him the roses.  (I really amazed myself at how calm I was acting-- on the outside that is).  He took the roses in one hand and looked straight at me and said, "They're for all three of you."  Then he said to me, "Would I mind if he gave them to the doorman to hold as he was going out."  I shook my head that I didn't' mind and he gave them to the doorman.  Then everyone crowded around and he posed for pictures for a while.  Linda would complain about the flashes and Paul would make jokes about it to her.  We began following them to the corner when he turned around to us (with his arm around Linda) and said, "Please don't follow us.  Give us a break."  It was said so sincerely that most of us decided to wait behind at the apartment.

We found out later that he had gone to his father in law's house for dinner.  By about midnight our numbers had dwindled down to just about four of us and we were quite frozen.  Suddenly around the corner Paul and Linda came, he quite red-nosed and leaning all over her -- obviously he had indulged in some wine (his favorite drink).  My friend asked him to pose and I watch this from about four feet away.  Then I said (don't ask me why I did it).  "Hurry up Paul, it's cold."  He turned dot look at me and made a face like "Awww" and then he grinned.  Finally, they finished with the picture taking, and as he walked not more than three inches past me into the building I said, "Can I ask you a question?"  and without stopped he said "Yes."  I replied, "Will you be doing any more films like the Jude film"  And just as he disappeared into the lobby he said, "Yesssss."  Just like that holding out the last letter.  Then they got into the elevator and he held up the roses he had just taken back from the doorman and he waved goodnight to us.