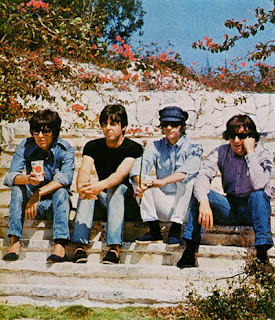 Infamous Beatles bootleg expert, Doug Sulpy has published his second book in his video guide series.  This one is called Conquered! and documents every video clip of the Beatles available in the year 1965.

Video clips from ITN, BBC, AP, the major TV networks as well as personal home video are all documented in chronological order.  He only documents the film clips that are available to the fans and not in private collections and have never been leaked out to the world.   They are organized by date, which is a great way to help get the correct dates by photographs.    The biggest portion of the book focuses on the making of the film Help!  It is interested to see the break-down of the order the help was actually made.    It's always interesting to read about some of the scenes that did not make it into the book.

All of the Beatles concert dates during the 1965 European tour and North American tour are also documented.   I especially enjoyed reading about the footage shot by fans.   Did you realize that the only concert from North American tour that has NO film footage is the Atlanta show?    I think that is interesting because very few photographs have surfaced from that particular concert.

The Beatles receiving the MBE is documented as well as the promotional films that were made that autumn and the Lennon-McCartney television special.    Only one concert during the 1965 UK tour had any film documentation   It is so sad to learn because there are so few photographs and no audio footage from any of those shows.

The biggest issue I had with the book was Sulpy interjecting his personal opinions into the book.   I just want to read about the footage that is available and the date it was recorded.   I really do not need to hear anyone personal thought about minor things.   He called the jacket John frequently wore at the time (the blue one with the stripes) "hideous."    He takes a crack at Ringo's singing of "Act Naturally" and made it VERY clear that he does not like the Lennon-McCartney special.      While I found some of Sulpy's opinions to be funny, I still feel like they did not belong in a book that is meant to help fans to organize and learn about video footage of The Beatles.    If he wants to share his personal thoughts, he would do better to have a blog or keep it on his webboard and leave it out of the books.

I still recommend Conquered!:  the Beatles 1965 Video Guide  along with the book written about 1964 because they are great resources in knowing what video footage of The Beatles is out there.  I have to give Sulpy credit for all of the hours it must have taken him to view the footage, transcribe what is said in some cases and organize it in the correct order.   I am sure it was a very time-consuming and difficult task that most fans aren't willing to take on.