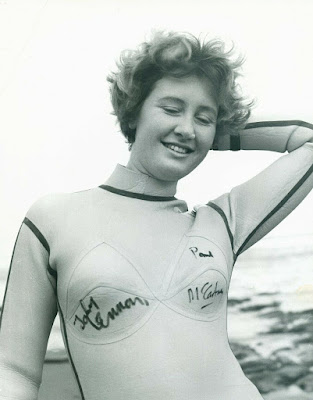 Swimmer Norma Campbell, 22,  is worried.   Should she swim in her new fashionable rubber diving suit ... or not?   If she does, four precious words written on her suit may be washed off.   And that means Beatles fan, Norma would lose her autographs of John Lennon and Paul McCartney.  Norma is the top women diver of the Subaqua Club at Scarborough, Yorks, let the suit to a television company who wanted to use it in a Lennon-McCartney "spectacular" due to be seen next month.  "The names were written with a felt tip pen, and I must try to preserve them," said Norma.   "Someone told me their hair lacquer is waterproof, so I think I'll spray them with that before I take a dip."

Is this girl crazy??   You don't go around wearing a swimming suit autographed by John and Paul!  And you most certainly don't go swimming in it!   Crazy Norma!     I am not sure if these are real autographs or signed by someone on the Beatles staff -- but still --- dont' do it Norma!