3 Days in the Lives of Five Desparate Paul People 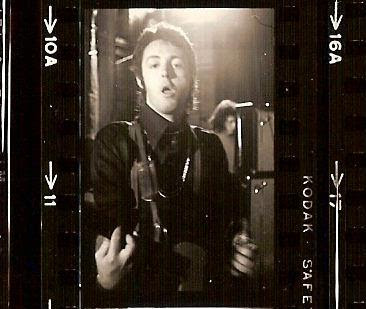 Story from the June/July 1972 issue of McCartney Ltd.

We met Paul on this glorious day in 1972, but to me, it was 1968 all over again.  1968 -- the year I spent many treasured days in the company of a very beautiful Paul.   Days in which I saw him smile, laugh, flirt, get angry, and just be very, very human.  Days of loneliness for him because Jane was gone.  He shared those days with us - his people- outside those 7-foot gates (at times they might as well be 7000 feet).  I think those of us who were in London the summer of '68 will agree we got our closest to him then.  It was great and we got spoiled.  But the last three years had left me living most of my life in the past.  Reliving things I thought would have never happen again.  The way Paul used to laugh at our nervousness with him or smile encouragingly when our words were caught in our throat.  I found myself now loving a person I thought didn't exist anymore. the abrupt (to me) changes in Paul almost had me believing it WAS William Campbell playing that bass.  I've been telling you all this now because on July 1st the past caught up with me.

Earlier that day Kris, Marie, and Char had seen Paul leave for some unknown destination.  Kris called Sarah and I, and we rushed down to his house with the wine and cards we had.  We'd been dragging around that wine for a week looking for the opportunity to give it to him.   When we tried to do that a few days before we ended up fighting with Heather!  Anyway, Sarah and I got to Paul;'s at about 3:30pm.  The five of us sat nervously in Sarah's car waiting for his return.  I wasn't sure what his new car looked like except that we'd been told it was red and low to the ground.  At about 6 o'clock a car that looked - like something from the Grand Prix came around the opposite corner.  I saw it and said to Kris excitedly, "Is that it??"  She said, "YES!  THAT's IT!!"  I promptly got out of the car as he pulled into the driveway.  I kept saying, "come on" not wanting to end up at the gate by myself.  Marie was close by as I approached the car.  By now Paul had stepped from the car and was opening the gate.  Linda was on our side and she gave us al ook like "don't you dare talk to him."  We ignored her and Marie got Paul's attention.  Just before this, he hadn't looked at us and we really thought he was going to ignore us.  But Marie called him and held up her birthday card.  He raised an eyebrow and lifted his head.  He started approaching us as Linda drove the car in quickly, nearly hitting him.  He pushed back his mid-section and with a surprised look and smile said, "Whoops!"   Then Marie said, "Can we give you some gifts for your birthday?"  Paul was beaming with a grin from ear to ear!  He replied, "For me birthday?"    "Yeah, sure!" His eyes lit up.  We handed him our cards (Sarah and I had selected a rather obscene card which we hoped he found amusing).  Then Marie and I both thought of the missing item -- the wine!  That was still someone in the back seat of our car.  We almost in unison, "Wait, we have some wine for you too."  Paul said, "Wine, you do swell."   Luckily for us, Kris grabbed the wine and ran up to the gate and handed it to him.  Paul almost shouted out "Wonderful, Thank you!!"  Sarah and Char heard him from where they were away from the gate.  He was still smiling this incredibly beautiful smile as we said our goodbyes.  All I could remember afterward were those huge hypnotic eyes.  I couldn't get my eyes of his face.  He wore a white suit jacket, a flowered shirt, and green pants.  His hair was clean and shiny brown.  I'll never forget that smile.  It just lit up everyone around.  We had been depressed for various reasons over there, but two minutes of seeing that man makes you forget all the other empty hours of your life.  A few days earlier we had written Paul and Linda a letter explaining that we didn't want to bother him at the house.  We just wanted to give him his belated gifts.  Perhaps this was why he was so nice to us.  He hadn't been that fantastic to fans for many years, as he was to us.

Well, it only took us two days to break our promise to not go to the house again.  It is just about impossible staying away when you know he's home.  We parked the car farther down the street than it has been before.  We wanted to see him, but we didn't want him to see us.   At 6 o'clock he zoomed right by us in the red.  We sat quietly (movie camera going) and merely watched him emerge from the car.  He walked to the gate, got out the keys, and promptly spread his legs as he opened the gate.  It was exactly the same kind of thing he did on the roof during "Let it Be" (all McCartney people will know which scene I'm speaking of).   Also as he stepped from the car he looked in our direction so we assume he saw us as he stepped from the car.  Then Linda slipped into the driver seat and drove the car in.  Paul closed the gate and we went back to the flat.  Marie was leaving the next day and what a perfect ending.

You know the old saying that goes "Don't press your luck?"  We should have listened to it.  that day Sarah, Kris, and I saw Heather and Mary when they came out to tell some girls to move from the gate. Rosie had left Heather alone with the two younger children.  This is a common thing for Heather by the way.  Anyway, she came out of the gates closely followed by Mary and two of their three dogs.  After awhile Heather rounded the troops up and went back in the house.  At this point, there were two German fans, four girls at the gate, and a middle aged woman her and husband with an Instamatic.  With that kind of menagerie, we felt sure that Paul wouldn't notice us in the car.  At 9pm we had been deserted by everyone including most of the cars parked on either side of the street.  We stuck out like a sore thumb.  Before we could park elsewhere the famous red car was coming up the road.  In our car was one of our English friends who was part of the former "baddies" of Cavendish Avenue.   We felt safe for a while before he had driven right by us and didn't scream.  I picked up my movie camera and began to film.  He bopped from the car and almost got to the gate when someone called him back to the car.  We're not sure who was the stool pigeon because ALL of Wings were in the car.  He leaned into the car and turned a split second later to face us.  IT was at this point I unceremoniously dropped my camera.  He stared furiously for a minute (seemed like forever) and we all felt sure he was coming over to yell.  Instead, he flung out his left arm and shouted "Get out...Get out...Piss off!" Well, we didn't have to be told twice!  I don't' know how Sarah even drove that car with Paul staring at us till we disappeared around the corner.  It was awful!  After talking about it later we decided he must have seen us when he got out of the car but we weren't going to bother about us until someone in the car forced him to react to us.  We knew by that time not to Irish being on that street again -- especially in that car.   A few days later we just barely missed getting another yelling when we met some German friends on his street and then left.  He had come tearing out of the house after warning them and lectured them about not hanging around the house.  We were thankful we missed that.

Paul was only in London two weeks rehearsing for his European tour, so we were grateful to have seen him as much as we did!  At that time we had hardly dare believe that some stranger in Germany would hold tickets for us to see Wings.  More about that later.

During Paul's stay in London, some friends of ours went to the park (Regents) with Heather and Mary.  They are selling some lovely color pictures of Mary -- sets of ten for $3.00 are available.  (Note from Sara -- the photos and story can be found on this site).

We really had a great time although when Paul isn't around it's hard to be happy anywhere.