Our last full day in England 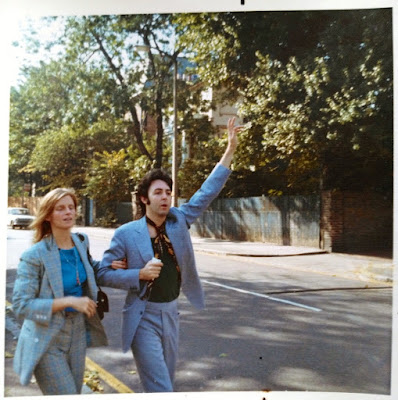 This fan encounter was written by Pat D. adn was in the Jan/Feb issue of McCartney Ltd.   The photograph of Paul and Linda was taken on October 3, 1972 -- so two days after the story.

About 20 to 3 on our last full day in England, Sunday, October 1, 1972, I had one of my urges and that was to go to EMI, so we managed to hop an underground for St. John's Wood.  We finally found ourselves walking over to EMI.  There were some girls we knew so we learned Paul had been due that morning but never showed.  I began looking down the street remembering what I had heard about his car and how you just couldn't miss it.  When I suddenly saw it coming, about a block away.  It knew it was it.  We had been there for just about 5 minutes and now so was he.   They drove in and I went inside the gate a bit.  Some guy went up to Paul as he got out of the car and began talking.  Linda got out and came around to the back of the car and smiled and said hollow then went over to Paul.  She was wearing a long skirt and a long-sleeved sweater, and what later turned out to be the top of Paul's suit.  Paul wore grey pants and a light-colored printed shirt.  I kept snapping pics and Linda would look over at us and smiled and waved.  Then they went in.  Boy was I shaking.  He looked so good just like on the Flip Wilson Show -- on better.

Around dinner time a lot of people came out.  I guess they were recording in one of the other studios.  They were all staring at Paul's car and touching it.  Once a lady stopped and asked who was recording.  WEndy said "BCLT" (initials for bacon, cheese, lettuce, and tomato) and she asked if they were American or English and if they were any good because she had never heard of them.

Somehow night and 10:30 came.  By then there were three groups of girls.  We were still inside the gate by our tree and on the left, as they came out, Paul was just bouncing away.  As they passed, Linda said, "goodnight girls."   Paul bounced on.  Then he turned and said, "good evening girls."  When they got to the car, Paul looked back at us as if to see if we were still looking (we were) and Linda stopped behind the car and bent to pick up some leaves and said she liked to "smell the leaves."   AS they were pulling out, Paul kept looking over and making sexy faces.  I am glad British cars are on the side they are, or else we would not be able to see him.  As they were driving off Paul tooted the horn and waved.  Lurvery way to end a trip to England.  Oh by the way, he was wearing the suit coat.