Wings head to Scotland in 1973 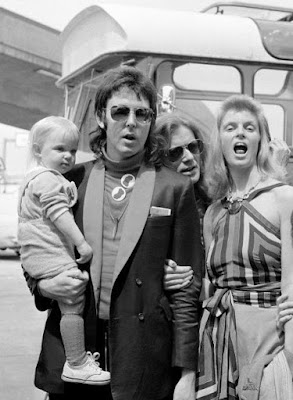 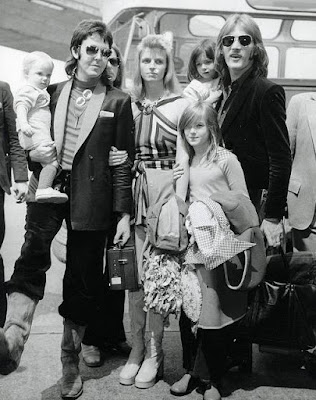 Our friends from McCartney Lovers and Friends now follow Wings to Scotland on the 1973 tour.  This was published in Summer 1973 issue of McCartney Lovers and Friends
We were in Scotland for two days -- the countryside is really beautiful.  It was strange to really see the fog come from the ground.  I was quite disappointed with the city of Edinburgh.  It was really gloomy and the "castle" was a big let down.  The people are very strange and obviously don't like intruders.  there were two concerts that night.
We saw Paul arrive on the bus, looking particularly gorgeous as he was unshaved.  He had a radio with him and he bent down and looked at us and started dancing off the bus!  He hopped off and got swarmed by the autograph hounds.  Linda gave us a big smile and a hello.  Paul continued to bop on in, and Linda stopped to sign autographs.  He looked back to see where she was and saw her signing and said, "Linda!  Come on!!"  She went in fast.
That night we had front row seats in the balcony for both shows.  At one point during the "dance" part, this girl started to faint.  So, a guard picked her up and put her on the stage.  She started dragging him over towards Paul instead of going off to the side.  Suddenly she gained consciousness and she grabbed Paul from the back, digging into his chest and making him fall back.  He pushed her off then the guard and Dave picked her up by her hands and legs and dragged her off.    We saw her later talking with friends and the "poor girl" was so excited that she had to sit down and cry all over again.
We saw Paul at the hotel that night.  We were the only ones there, but when the bus arrived, out of the nowhere 20 people arrived and he was swarmed.  There was a show in Glasgow the next day, but our train passes ran out, so we had to get back to London.    We were hesitant about Glasgow anyway because we hear a lot of stories about it being rough.  If they don't like you there, they get you with razor blades!  I was going to ask John (one of the roadies) to give me a ride down to London from Glasgow, but he arrive din their van with the other roadies and some groupies, so I didn't.  (If any of you are wondering about groupies and Mr. Mac-- forget it!  No chance!).
We got back to London the next day.  One of us went to the show in Glasgow, so I will leave it to her to review it.
Posted by Sara S. at 8:16 PM