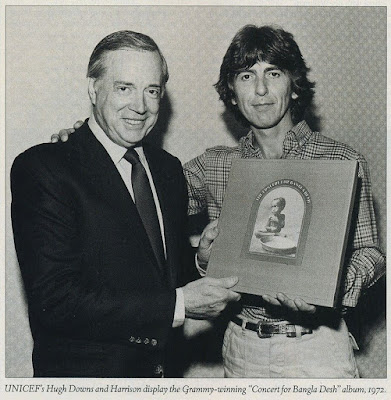 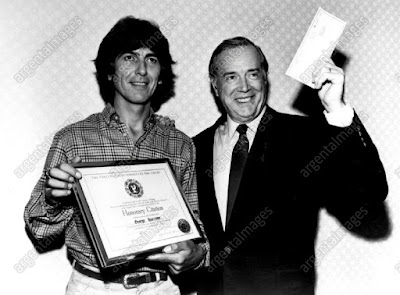 U.S. television news reporter, Hugh Downs passed away yesterday at the age of 99.    I always enjoyed watching Hugh on 20/20 with Barbara Walters in the 1980s and 1990s.    He always seemed like a nice guy and a good reporter.

Hugh's Beatles connection has to do with George Harrison and the Concert for Bangladesh.   The famous concert took place in 1971 and all the tickets sale money went to help the people in Bangladesh.  More money was raised by releasing the concert on an album as well as a film.    Also, George and Ravi started up a fund through UNICEF so that fans and supporters could give money for the cause.

All this sounds great, expect 85% of the money was NOT going to Bangladesh.  Profits were going to the record label (Apple) plus Allen Klein and Peter Bennet  (allegedly) were selling promo copies of the album to people and sticking the money in his pocket.    Money also had to go to the U.S. government for taxes.     You can read all the confusing details in this story from the L.A. Times


In 1982, the mess was somewhat taken care of and George presented UNICEF with a check for the people of Bangladesh.    Hugh Downs just happened to be the chairmen for the U.S. committee of UNICEF from 1978-1998.    So so when George gave the check and got an award (does that say honorary citizen?),  it was Hugh Downs that was there to do the honors and pose for some photos ops.