This is a review of the Wings concert in Liverpool on May 18, 1973 written by Kevin Clark and published in the December 1973 issue of With a Little Help From my Friends. 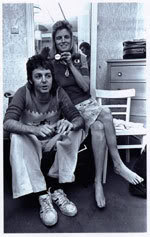 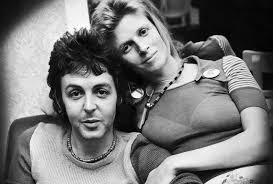 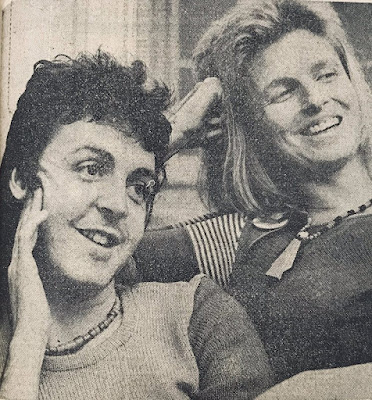 Tonight was the night I never thought would come.  After paying about four dollars and traveling 90 miles by train I was looking forward to tonight.  I was pleased to learn that the theatre was only 500 yards from the station, and even though the first concert didn't start until 6pm when I arrive din Liverpool at 4:30, there were dozens of people outside the theatre waiting to go in. I went in with everyone else at 5:40 any by 6:10 the theatre was jam-packed.

The announcer for the night appeared on the stage in a dark suit.  He had very tanned skin and black wavy hair.  The audience thought him to be rather effeminate but he didn't seem to mind the whistles.  He introduced the first group, "Brindsley Schwartz" who provided us with a combination of folk/commercial pop.  The drummer, incidentally, was wearing a "Red Rose Speedway" T-shirt, and the group were on for about half an hour.

A ten-minute break followed after the compere had thrown out about a dozen king-sized balloons which he had asked us to keep going through the show! Bloody twit!

When the compere reappeared the audience was by now expecting Wings to come on, but "The Keefs" appeared, who were a poor acrobatic duo assisted by a poodle, the latter receiving the well-deserved applause!

The compere took the stage once again and asked everyone if we had any requests.  "Love me do,"  "Yesterday" and "Six Days a Week" were some that were shouted before the compere disappeared once again.

After five minutes the compere, now in a sand casual suit, announced that the moment we had been all waiting for had finally arrived (it was now 7:20pm).  "Live, on stage in Liverpool, Paul McCartney and...." That was all I could hear.   The other three came on first (Henry and the two Denny's) closely followed by Paul and Linda.  It was a totally unbelievable experience being about 20 feet from Paul McCartney (who says he's just an ordinary human being?!) Surely no ordinary person could generate so much electricity just by being there!!

Paul smiled and thanked us for the tremendous response.  He was wearing black velvet trousers and a dark jacket.  Linda wore a 1960 style red dressed and raised heel boots; Henry had on a red jacket and I can't remember what the others wore.  Paul, Denny Laine, and Henry had "Red Rose Speedway" stickers stuck on their guitars.  Paul's hair was longish and very dark, his face seemed thinner than of late. Linda looked quite attractive, and Denny Laine looked as if he was just 20!

The first number was one I hadn't heard before, called I think, "Sunday."  Then Paul announced a track off "Red Rose Speedway" called "Big Barn Bed."  The sound was impeccable.  That too went down well.

Paul went on introducing the next number, "When the night" and slipped up by saying, "Big B....Big When the Night!"  the harmony on this song is very Beatle-ish.  The next song was one off the first Wings' album.  "Wild Life" gave Denny Laine a chance to handle lead guitar.

Next, Paul introduced a number written by Linda entitled "Seaside Woman."  This was a simple reggae song but it received adequate applause.  Linda thanked everyone for the appreciation.

Henry decided to steal a bit of the Limelight by reciting an Irish poem while Paul moved over to the piano.  Linda stood up to play the tambourine, and Denny Laine took over the bass.  Paul said down the mike that it was strange him being down there (on the stage).  "I used to be up there watching Cliff!" (He pointed to the dress circle)

Straight into "Live and Let Die" next which also went down famously.  Even though no orchestra was available for the middle section like on the record, the song was enhanced by the flashing of spotlights at extremely short intervals.  The effect was extremely successful as well as headache-inducing.

Paul introduced the next number by suggesting everyone snuggle up close to their partners.  They did (Henry shouted 'Get 'em off!'.  They didn't.)  The opening bar of "My Love" was enough to start the audience screaming and applauding.  Minus strings it was equally as good, so much so that the audience began to clap before it ended.

"Maybe I'm Amazed" followed on to get a terrific response.  Henry's guitar work was very similar to how Paul handled it on the McCartney album.  The applause lasted for 20 seconds at least.  I loved it.

Denny Laine took over Paul's seat on electric piano while Paul returned to bass.  Denny seated himself and announced to do a "blast from the past."  The opening bar of "Go Now" was remarkably like the 1963 Moody Blues version when Denny sang it then.  After that, he got up and Linda took over, while Denny returned to rhythm and Henry introduced another song of Denny's recorded by, quote "Bloodnose, Bloodrock." (Paul said "Bloodstone").  "Colin Bloodstone," Henry said, "Say you don't mind" was heavier and faster than Colin Bunstone's version and ten times better.

Paul introduced the 13th number by asking us all to "clap, bop, stomp, and enjoy ourselves." "The Mess" gave Linda a chance to play the mellotron.   Bloody fabulous song.  Within 10 seconds, girls were dancing in the aisles, within 20 seconds everyone had rushed forward to the front of the stage.  Within 30 seconds everybody was standing, some on the seats even!

The atmosphere was truly fantastic.  We wanted more and got it as Paul announced "The song someone  banned:'  I don't think it's dirty!"  "Hi Hi Hi" was bloody great.  The song finished and Paul said, "thank you," and waved before they left the stage.  We weren't having that, so we all began to shout "more, more more" and stomp our feet and clap.   The noise we made must easily compete with the Sunderland fans when they won the F.A. Cup final!!

Not surprisingly, Wings came back for an encore with "Long Tall Sally."  The way Paul was screaming down the mike made you think he'd got us all in the palm of his hand.  He had!

They left the stage after that, but we still shouted our appreciation to the same extent as before.  Even the compere pleaded for Paul and his group to reappear.  They did, eventually, but only to tell everyone, "We have no more songs for you.  See you all again.  Goodnight and thanks."

We all accepted defeat and tried to catch some of the special plastic souvenir plates the roadies began to throw to the audience.  Very slowly we all made for the exits still trying to sink it in that it was Paul who we had just seen on stage.  Just as we were nearing the exit, there had to be some wise guy to shout, "There's Paul!"  There was!  I've never been so squashed in all my life, but I was loving it.  And we saw daylight again we saw the queue of fans waiting to go in for the second show, and told them all how super the concert was.  Their memories were yet to come, mine were never to be forgotten.  As I headed for the station I checked to see if I still had my program, creased posted and blue plate, and smiled.

Wings have taken off.  Long may they fly Hi Hi Hi!