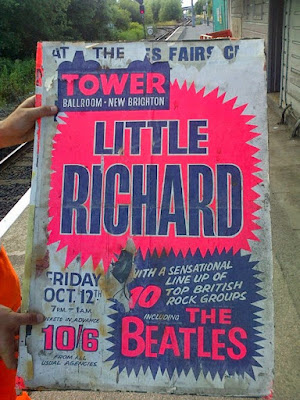 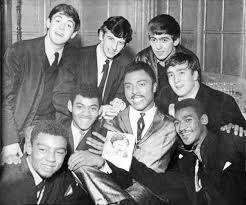 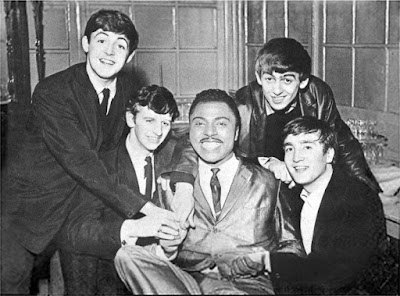 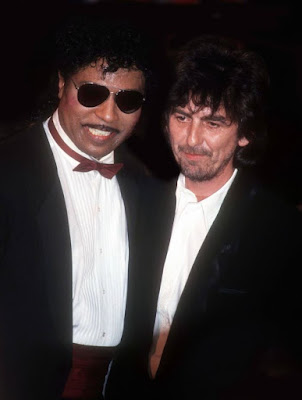 This site is to share photos and stories of people, both famous and not, that met one or more of the Beatles in person.   Today I am sharing when The Beatles met someone in person instead.   Little Richard was one of the biggest influences on the Fab 4 and their music.   It isn't a stretch to say that without Richard, Chuck Berry, Elvis, Buddy Holly, and select others, there wouldn't have been The Beatles as we know and love them.

Paul has been on record saying many times how he directly copies Little Richard's style of singing when he performed songs such as Lucille, Long Tall Sally, and other Rock n Roll numbers.  That is what made the girls back in the Cavern days swoon over Paul --- how he was able to hit those high notes and sound like Little Richard.

The first time The Beatles met Little Richard was when they were one of the opening acts for him at the Tower Ball Room in New Brighton in 1962.    This was obviously a dream come true for the guys.  Who wouldn't want to be the opening act for one of their favorite singers?    Brian Epstein talked Richard into taking a picture with the group and he told Richard that one day the guys were going to be famous.   Little Richard didn't really think too much of them as a musical act at the time.

The Beatles once again opened for Richard at the Star Club in Hamburg.  I can't locate any photographs of them together during this time period.  It is known that Paul and Richard sat down at the piano and Little Richard himself helped Paul perfect the "whoooo" in "Long Tall Sally."  Wow!

John went on to record Little Richard's songs on his "Rock n Roll" album and wanted to get him to be on the Mike Douglas Show when he and Yoko hosted in 1972.    They ended up with just Chuck Berry, but John's original idea was to have one of his Rock n Roll heroes each day that week.  It is too bad that Little Richard's schedule didn't work out.  That would have been great to see John and Richard together.

Sadly Little Richard passed away yesterday after cancer had gotten in his bones.   He will always be remembered as a pioneer of Rock n Roll that was the first to have mixed black and white fans together at his concerts in the late 1950s.    For Beatle fans, we will remember him for his influence on the band and thank him for his music.

Rest in Peace Little Richard.   Say hi to John and George for us.