Interview with John and Yoko
The National Observer June 3, 1972 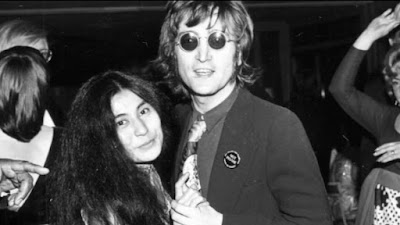 Q:  Did the collective Beatle image hide your real personalities?

John:  The guy that wrote A Hard Day's Night tried to write what he thought we were after being with us for three days.  And that rather set our image, you know like boom-boom-boom Ringo, sharp John, sweet Paul, and serious George.  These were caricatures of what we were.  Although Epstein had cleaned us up a little and he took the cigarettes out of our mouths on stage, and wouldn't' let us eat on stage and told us to stop swearing, we were still doing all right just being ourselves.  We were very popular not going goodie-goodie on stage.  If you're not yourself, you pay for it.  And we paid: That was the suffering I felt being a Beatle.

Yoko:  The Beatles had a neutral or bisexual image.  It was not really a masculine image.  It was an image that wouldn't go over in an age when people are aware of women's identity and blacks and other races.

Q:  In their heyday, did the Beatles use drugs?

John:  They never used hard drugs, but when we were kids in Liverpool, pep pills were already rampant.  It was the pill age then.  Marijuana didn't come until we go to America.  The only way to keep going on the road was to take something to keep you awake, whether you got it from a doctor of a P.G. man.  And we drank quite a lot.  The Beatles were famous for whiskey and Coke.

Q:  What caused the breakup of the Beatles?

John:  It starts when Epstein died.  When we came back from India, we made the double album, sort of looking back to R&R, very simple and basic.  George was writing a lot then.  That's when the tension really started showing.  We were less and less interested in each other's songs.  Paul was going more and more into "Mary had a little lamb" and I was going more and more into "uncle-punkly-jingle-gangle," with sounds and things.   so it was a musical division more than an emotional division.  Everybody was uncomfortable,  but nobody could put his finger on the reason.  Even making an album became such a production.  It was like we had all outgrown The Beatles.

Q:  Didi Yoko have anything to do with the breakup?

John:  She may have been the last straw for some of them.  Meeting Yoko was, in a way, like meeting Paul in the early days:  meeting somebody with the same interests, with a brilliant mind, who had the same kind of vision I had.  But after 10 years, it became nothing.  When Yoko came into my life, nothing else seemed important.  But she didn't say "Why don't you leave those lunatics."  She would have been content to join in.  She'd have come to a session and as she had with other musicians, performed with us.  But nobody performed with The Beatles, nobody.  Paul always wanted to keep the Beatles pure, whereas George and I wanted to expand The Beatles.  McCartney wanted to be The Beatles forever.  George and I had been trying to break that down for quite a bit.  So it finally became evident that the only way to break it was to break it.  Paul ran up a year later and said, "I understand what the rest of us put you two through.  Now I'm going through it with Linda myself.  And I understand that what you two were trying to do was just be yourselves, individuals.  I'm trying to do the same thing now.  That was the only clue I had to the announcement he was going to make that night:  that he had left The Beatles.

Q:  Did all that, climaxed by the McCartney suit, end your long friendship with Paul?

John:  He and Linda were at our New York apartment just a few weeks ago.  We all want to get this thing settled, the Apple thing.  We were disagreeing, then the lawyers came in, and it turned into a pitched battle.  But as soon as it died down, we started getting in contact again.  We both basically want the same thing:  Everything that we own coming directly to each of us as individuals, and not into one big pot; and one-quarter of everything that we did together coming directly to us, instead of into a pot.  Now my album, Imagine, goes into the pot; it's divided amongst the four people.

Q:  Why was George always the most inconspicuous?

John:  When we met George, he was musically goon on the guitar, and he sang a little bit, but he had never written a song in his life.  And it was years before any of his songs made any sense.  It wasn't that we were holding him back; it was just that they were such trash.  They were rubbish, and we weren't about to put his bit of rubbish on when we could turn out better rubbish.  He was lead signing in his own group he left and became our guitarist because we had a presence on stage.  That is something he never really got.  You can see it in the Bangladesh concert.  You've seen comedians on stage together, it's a fight for the camera, right?  Well, it's the same with musicians on stage.  It's every man for himself.  So he had all the chances.  Stage and film, they're for extroverted people or introverts who show themselves to be extroverts.  George is still introverted.

Q: How do you explain the Beatlemania of the 60's?

John:  We were just reflecting the culture.  Our style was instinctive, intuitive.  We picked things up from the street.  The Paris kids were wearing bell-bottom trousers and Beatle haircuts before we popularized them.  In London, we went in a shop that had a Pierre Cardin Corduroy coat with no collar; we picked it up, wore it, made it famous.  The decision to put our hair forward was a big one because the kids in Liverpool are tough kids:  It took us a long time to convince them we hadn't gone fag just because we had changed our hair.  Before that, with Vaseline and Brylcreem.  We were descendants of Rock n Roll, with the original pop musical revolution as far as I'm concerned.  The Beatles just carried it a step further.  Rock n Roll was basically black music, except for a few people like Elvis and Bill Haley.  We sort of intellectualized it for white people.  We made white kids in America aware of their own black music.