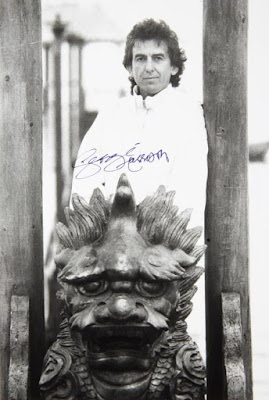 Shelley Germeux is a writer and friend of this blog.  Actually, she wrote one of my all-time favorite pieces that I have shared on this blog.  It is a story she wrote for DayTrippin' Fanzine about some Paul fans that found themselves near the Twin Towers on 9/11.     Shelly shared with me that she was excited that an article she worked on was getting published in a big-time magazine, The Mountain Astrologer but at the same time she was disappointed because the magazine was to be released at all the major bookstores and they are all currently closed.    No one was going to be buying the magazine!   So I told her that I'd be more than happy to inform all of the readers of MTBFR about her article, especially since there are quite a few George fans that visit here.


I first have to say that I know basically NOTHING about astrology.  It has never interested me too much.  I am a Libra just like John Lennon.  That is all I know.   If you are heavily into astrology and are a Beatles fan, you gotta get this magazine.   The article Shelley worked on along with Pam Younghans is called "Give me Hope Help me Cope:  George Harrison's Heavy Pluto Load."    The concept of the article is very interesting.  It is written as if Pam is interviewing George Harrison and talking to him about the effects of Pluto in his life.   George had an interest in astrology, so this isn't too far fetched of an idea.

The most interesting thing to me was that the article shed some light on the ever-pressing question every February of "when do we celebrate George's birthday?"  and "why did he change it anyhow?"

If you are interested in astrology and/or George Harrison, you can purchase a copy of the magazine directly through their webpage.
https://mountainastrologer.com/tma/

If you aren't but have a friend that might be interested, please pass along this information.  During times like these, we need to support our Beatles brothers and sisters more than ever.