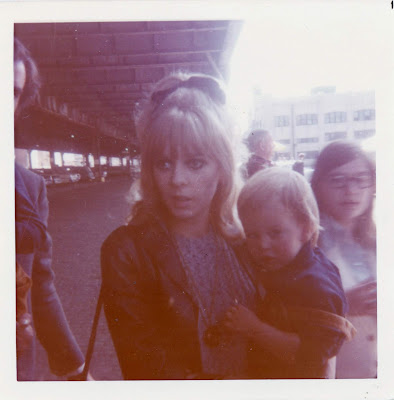 This story is found in the September 1970 issue of the Beatles Rule fan club newsletter.

We went by bus to Hanstead to Compton Road to see Ringo. Arrived there around 10:15 am.   Went to a couple of other houses asking if Ringo lived there... well we finally did find the house, and went up to the door and knocked.  We heard Jason saying, "Mummy someone is at the door."  Maureen answered  (no makeup, house dress on and very pregnant) and we said could we see Ringo.  She said,  "He's busy."  Glenna then snapped a picture of her and she said, "That's not fair...honestly.  Tch!"  Glenna immediately said I'm sorry, but she still gave Glenna a very nasty look (a sort of look that goes right thru you).  I then asked Maureen if she would accept the photo album I made for her family when I saw them last year when they came to N.Y. on the Queen Elizabeth II.  She said, "Oh" and then closed the door in our faces.   After feeling like two cents, we decided to go into town and get Maureen some flowers and candy to make up for what we did.  We asked one of the gardeners up the road where the nearest town was.  He said it was about half-hour walk.  After about twenty minutes, we realized the road stretched out before us and the half-hour walk was more that one and a half hours.  We went to the candy shop and florist and got Maureen a bunch of pink carnations.  We hitched a ride back and gain got off at Compton Avene.

Went back to Ringo's and waited.  It was freezing cold!  It was about noon then and we hoped Ringo would come out about an hour and a half later we heard a car door slam and within split seconds we finally saw Ringo.  He was driving.  He smiled a big one at that and waved at us.  I took some pictures and the others took movies.  He really looked great.  as soon as he was gone we went back to the door and handed Maureen the flowers and candy we bought for her.  She gave us such a beautiful smile and we really felt good!  She said, "Oh, you didn't have to..."  We said to her that we wanted to apologize for that morning.  I asked her how she like the photo album.  She said, "I didn't know you took so many that day..."  Jason was at the door with her at the time smiling at us also.

It was about 4:30 pm and we were still waiting for Ringo.  I asked the others if they wanted to peek in the backyard.  Sure enough, there was Zak and Jason helping the workman.  It was cute to see Jason picking up the brick and throwing it and Zak struggling with this big shovel.  For 15 minutes we watched and took movies.  Zak is so shy he turned to look at us and then turned back Jason, on the other hand, is very much like his "Uncle Paul."  He kept waving and smiling at us.  Those two kids are so adorable!  An hour later Ringo and this guy came back in the car and we all got excited trying to wave Ringo to stop.  He waved us away.  We were shocked.  I kept wondering what happened.  The other guy came out and Glenna asked him if Ringo was mad.  He said, "No...he's always like that.  He's a family man and he wants quiet."  A few minutes later we looked back and saw Ringo playing with the kids in the yard.  It was something you read about but never expect to see!