This is an interview with John and Milwaukee's WZMF in 1974.   A recording of this interview is out there to listen to if you look. 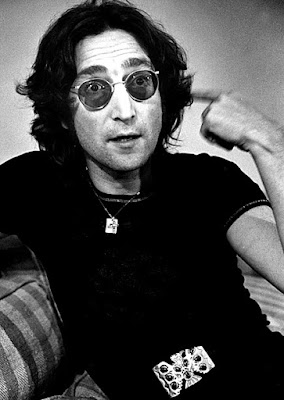 Q:  I read the other day that you've accepted the fact that you are an ex Beatle, a fact that for a while you were hostile to.

John:  Well, I think it was a case of divorce pains, you know?   Now I'm collecting Beatle memorabilia from the Beatlefest.  I mean, that how it's changed, right?  I was like shaking off the dust, you know?  Now I look back at it with fond memories.  When we see each other we're not talking business.  We've been seeing a lot of each other this year, and we've stopped business.  We've seemed to have settled the business and everyone seems to talk about, you know, 'didn't we have fun in Hamburg?' or 'remember that day on tour when the girl jumped on your back?' that kind of stuff, so it's all like easy going now.

Q:  You seem to attack McCartney in your first couple of solo albums.  How do you feel about Paul now?

John:  Well, this is like a joke, 'We're just good friends.'  We're pretty close now, and like I was telling you before, whenever he comes to America, he comes with Linda to see me and we go eat and reminisce about old times, and we really both have evolved out of whatever feelings we had when we first split.  I think it's a case of, we were more scared than we thought --- all of us.  However, the split happened and being suddenly on your own after ten years was a pretty scary thing for all of us.

Q:  Since the split, I think you probably have turned out the most creative things.

John:  That's nice of you.  I guess it's a matter of opinion.

Question:  My point is not to give you a stroke.

Question:  Do you think  McCartney, just from your personal vantage point of what his potential is and you probably know him better than most people, do you think he has come along since his first solo album, which I personally was kind of disappointed with.

John:  I think he's in the process if it hasn't already happened, of freeing himself somehow or other.   I think it does show in the music as much as on one level it gets to you right away; I don't mean in a M.O.R. way.  There's definitely something musical happening in the earlier stuff.  Although the music was there, it was just like he had it in an overcoat and I think it seems like he's taken his overcoat off now.  I think it's very awake music, whatever it is, and I started listening to it again and I must say I dig a lot of it, you know.

Question:  Do you ever resent your gung-ho attitude?

John:  No, I don't because I've had to adjust to being like that because that's part of my personality, right?  And it's a bit to do with the artist's side like you said.  If something's going on and it's around me I'm sort of like a chameleon.  I just really get into it.  If it's cornflakes or even with my food.  If I get into a food I eat only that food for weeks until I'm sick to death of it.  Well,l that's the only way I know.  It's like at school, they used to say, 'He's intelligent but he only does what he wants to do', which is supposed to be a bad point And if I'm interested in something I really like to get inside it.  I don't care if it turns out to be not the answer to the universe when I'm through with it.

Question:  How do you feel about the constant rumors that the Beatles will be getting back together?

John:  A couple of years back it might have irritated me, but now it doesn't.  Sometimes I think ...  oh, are they?  I mean, it's a weird feeling.

Question:  Is there anything anybody who wants to help you to stay in the country can do?

John:  Yes, they can actually.  If they write letters to their Congressmen or Senators it shows that there is a sort of interest from the public in having me stay here.  Although some of them might think one letter won't make a difference, Congressmen are like advertisers, one letter represents twenty or thirty.  So if five people write they reason well, that's five hundred people writing.  And it really does help because if they, whoever they are, thin that I don't have any support, well, then they can really come down on me.