In the short period of time in 1974 between Pattie and Olivia,  George had a girlfriend named Kathy Simmonds.   Kathy made the round with several rock and roll guys.   She dated Rod Stewart and Harry Nilsson before she started going out with Geoge.


Kathy was a model and had been a movie.  I am not sure, but most likely George met her through his musician friends.   At this time, George was working on a lot of different projects at one and was drinking heavily and using cocaine.  In August 1974 he and Kathy went to St. George Bay in Grenda for some relaxation.


When they got back, I would assume that Kathy moved into Friar Park with George.     Here is an interview she gave to The Sun that was printed in the September 13, 1974 issue.


"You know, Goerge won't allow meat in the house.  And I've come to think that leather shoes, fur coats, and so on are unnecessary too."  She's started meditating.  'It wasn't difficult to learn."  She's studying the Krishna religion -  "I won't be a hypocrite and pretend to believe in it straight away."

Has she changed him at all?  "I persuaded him to get his hair cut shorter," she says.. "One of my best friends is a hairstylist and he had given George a great new look."

"The funny thing about us is when I was at school I scratched on my desk the words, 'I Love George Harrison.'   When I told George he said, 'I'll bet you put 'I love P. McCartney instead.'   But really it was George I liked from the start."

"George is quiet, a gentle person who just likes to be left alone to get on with his work.  But it is wonderful to know someone from whom you can learn such a lot."

On September 14, Kathy and George went to the Crosby, S.N.&Y. concert in London and George was seen by the audience peeking around the amps and taking pictures of the crowd.

George left Kathy behind in England when he came to America for his 1974 Dark Horse Tour.  As soon as George met Olivia in person, his relationship with Kathy was over and it was Olivia for the rest of his life (well---you know what I mean...).      Kathy was heartbroken because she believed that George was her one true love.    Eventually, she did marry and had two sons.  One of them she named George.    Kathy passed away in 2017.

When I was in Liverpool in 2013 two of Kathy's signed George items were on display at the Beatles Story Museum.   I have no idea if they are still there today, so I will post photos.   One is a copy of George's favorite book, the autobiography of a Yogi given to Kathy's mom that George signed and another is a letter or lyrics to a song given to Kathy from George. 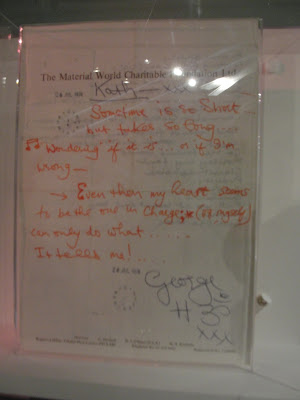 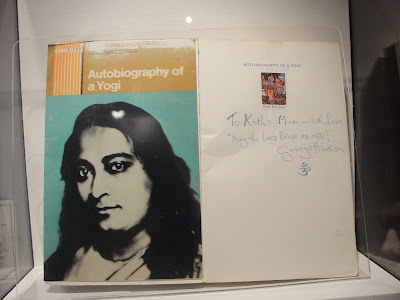