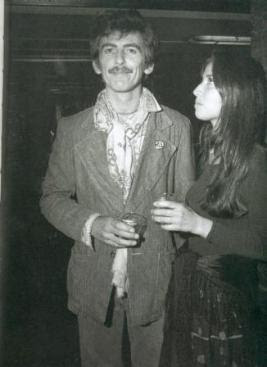 This interview was made in London in March of 1975 by Swedish journalist Ann Wachmeister.  It was originally published in "Henne" - a Swedish magazine in May 1975.

After two hard day's nights and four canceled meetings in restaurants around London, he finally appeared with the words:  "Sorry, I'm a bit late."  He could only spare half an hour he said, but we talked for more than two hours, while George not once looked at his watch.

The house where the interview took place in is in Chelsea and is, by the way, his London office and studio for his company Dark Horse.  George appeared to be nothing like the eastern-influenced preacher he's often said to be.  I found a clean-shaven, boyish 32-year-old man with a twinkle in his steady dark brown eyes.

The name Dark Horse came to George's mind, as so many other ideas, from India.  He once saw the dark horse with the seven heads in a little village temple over there.  It became a song, an LP and a record company.  I started to ask him about his interest in India.

George:  It all started around 1966 when I first got to hear the music and then in June '66 I first got to meet Ravi Shankar.  He started to teach me the basic rules in the music and on the sitar.  From that, I hear that music, that's why I brought Ravi and other Indian musicians on my tour.  But it seemed most of the audience didn't like it, it came as sort of a shock for them, they expected a kind of Beatle-show, but I just wanted to give them something new even though I did several Beatle numbers."

About songwriting, how do you write your music?

George:  Usually I write the melody first and get an idea for the words, but sometimes I write them all at the same time.  The words I have to think more about than the music.  And sometimes I can write a whole song with say on verse and chorus, then I leave it and then come back and finish off the other verses.

What about "Bye, bye Love" on the Dark Horse album?  Why did you include that in it?

George:  One night I was just at home playing the guitar with Tom Scott.  He was playing bass.  we were just sitting by the fire singing songs.  For some reason, I started to sing "Bye, bye love" but changed the melody into more, like, sort of blues-thing.  And for some reason, it just stuck in my mind and I decided it would be fun to record it.  And I recorded it all on my own, you know, I've got a studio in the house so I did not have any engineers or anything, so I just did it all on my own.  First I had a rhythm-machine to keep the time and then I just played it on the guitar and later I added the drums, the synthesizer, the bass and all this.  It was a good exercise for me, recording without any help.  And then I got more involved with it and started changing words to what was happening with my wife.  And that was it.

George:  No, she loved it.  I sent Eric and Pattie a copy, they loved it!  If you split up with your wife, the press automatically want you to hate each other, so that they can write about it.  The press are always trying to catch you doing something, so I've learned from the past, that if you have something to hide, there's always somebody trying to find out what it is.  There's nothing to hide anymore, you know.  I've not had a private life for over ten years, so I mean, I get used to it.  The thing the press can't understand is that I could be happy that she's with Eric because he's one of my best friends.  But why not?  you know we're still great friends and I love Eric, you know.

Do you ever miss the old times being in a band, and being in the Beatles?

George:  I think all of the Beatles miss playing in a band, but not necessarily The Beatles.  you know times have changed, four people in the band it was very hard.  We were playing concerts to 20,000, up to 60,000 people.  And in those days, the sound systems were not as good as they are now.  We have little amplifiers and had something like 25,000 people shouting at us, we couldn't hear a thing.  Now the audience listens more.  But, you know, it's not easy with just four people in a band.  I remember on the last Beatles tour, it was a bit difficult trying to do things like "Paperback Writer" which we got into 8-track recording.  And surely we could not play "A Day in the Life" and "Strawberry Fields" as a four-piece group because it's studio recordings, so you have a better chance to do it with a few more people in the band and I loved working with this band on the U.S. tour, it was a good experience.  The horn players and it's nice to feel a good band behind you.

What sort of music do you listen to yourself?

George:  I tell you, I like the classical Indian music, the old original blues from the 20s.  Of the more up to date people, I prefer Smoky Robinson, Tamla-Motown stuff, Bob Dylan and the Band.  But my main thing is Indian classical music.  And I admire Ravi Shankar very much you know.  He spent 15-20 years touring the world, spreading the music and it has not a big following compared to how far our that sort of music is.

What about a Beatles reunion?

George:  I can't really see us getting together again.  We all enjoy our separate careers too much.  But this does not mean that we don't' like each other, because we are in fact very good friends.  The first year after the split, there was some bitterness between us, but that's all gone now.  I see the others quite often, in fact, I saw Paul and Ringo just the other day and I get in touch with John every time I got to the States.  You don't forget people you've been close to for ten years.  And, as you know, we still play together on each other's records now and then.

George's plans for the near future were:  to edit the film from the recent U.S. concert tour which will hopefully be released lat summer '75.  Also a new tour, this time to South America, Japan, and Europe.  Probably in early '76.  Finally, a new album planned for release from Christmas this year.  He's a busy man, that Mr. Harrison!