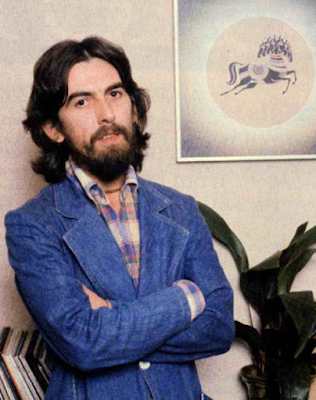 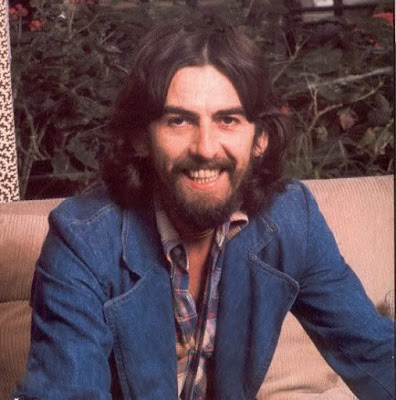 This "interview" that Geroge gave on WNEW in April 1975 was transcribed for The Write Thing newsletter and was published in the January/February 1976 issue.  I put interview in quotes because no one is really asking George questions.  They are just statements.


Announcer:  One of George's early ambitions was to leave Liverpool.

George:  It was pretty depressing really ... there seemed to be a shortage of anything to do.  It looks as though you had to your best in school to get even the worst job.

Announcer:  Liverpool was a tough town in those days and Teddy Boys would usually beat themselves up for entertainment.

George:  At that time I was about 15 and sort of puny -- in fact in those days I used to be a good runner.  Anytime I'd see a bunch of them coming I would just avoid that sort of scene.

A:  George recalls that John Lennon fairly idolized Marlon Brando and his favorite movie was "The Wild Ones."

George:  It used to be a joke on The American Teenage movie scene.  John would say in his American accent, "Where are we going boys?"  and we would say, "To the top Johnny!"

A:  George would like to put his Beatle image behind him but can't quite seem to do it yet.

George:  I do think about it a lot because people are thinking about it all the time.  It's just like when I came to Los Angeles a couple of weeks ago a friend of mine said to me, 'Hey!  I just got a copy of 'The Beatles in Japan at the Buddha Kahn' so I said, good let's listen to it and then you get into reminiscing about it.  It's like if I ride down Sunset Blvd.  There's more chance that I'll hear an old Beatle tune than a newer tune.

A:  George is still amazed by the popularity of the Beatles.

George:  Ya see that was the amazing thing about it is that it never stopped peaking. ...usually thinks peak and just level off...

A:  George says things began to turn sour after the death of Brian Epstein, and that the making of the White Album was a time of tension for all of them.

George:  At that time things started to get crazy.  It was obviously in the planets, toward the end of that album I felt relieved to get out of the studio, usually, I would feel happy when we completed an album.

A:  The tension climaxed during "Let it Be"

George:  "Ya see this was the plan, we were gonna do a TV show and the album was gonna be the soundtrack of the show, but what happened was that the album became the rehearsal basically and the film became a documentary of us rehearsing.

A:  George felt the tension more than anyone else.

George:  you see when you are disallowed to grow and that was, you know, I was against a broke wall.  It was very difficult for me.

A:  George felt he was being shoved aside as the presence of Yoko Ono and Linda Eastman was being felt.

George:  In the early Beatle year our girlfriends or wives would come down occasionally but it was always the four of us.  But at this point, it became Linda and Yoko.  I don't say this to be spiteful but that was really another straw that helped break it.  You know that there was o way I was suddenly gone abe in a group with Yoko, not if it's gonna be called The Beatles.  I mean I don't mind being in the Plastic Ono Band.  It was more difficult for me to communicate with John or Paul as if the same way I was trying to talk to you now and somebody's sitting on me shoulder butting in and giving his opinion.

A:  George claims he had written dozens of songs that were being rejected by John and Paul and he was bitter about it.

George:  We didn't have enough space  At that time twelve tracks were recorded and each of us had more than twelve for any given album.

A:  In 1966 the Beatles discovered religion clasped tightly to the bosom of the Maharishi.

George:  Actually what happened is that I went to see the Maharishi and I just asked John if he wanted me to get him a ticket and then later found out that Paul wanted to go and whatever went down I planned to go to India.  John came along and Paul and Ringo came along too.

A:  none of the others were so turned onto the Maharishi as George.

George:  They all went through it but, I think there is a scene in "Let it Be" where Paul is talking about what happened in Rishikesh from what he said, I forget what it is, made me think that he completely missed the point of what he was doing there.  John definitely benefitted from it.  Ya know, it was the brightest I'd ever seen him.  His eyes shoned and he looked very well and he got off drugs for a while.  It's like the song on Rubber Soul or something, "turn off your mind, relax and foot downstream..."  ya know if you turn off your mind, start to relax and then try and grab hold of something for fear of what's gonna be downstream, then you blow the whole thing and I think that is what was happening with Paul.

A:  George, when did the first turning point come within the Beatles?

George:  It came when we were given that first acid.  That's when things started changing (laughter).  The first time John and I had dinner with this guy who was a dentist, and he just dropped it in our coffee and so John and I went on this trip.  It was very spiritual. I mean I experienced more in twelve hours than I had in 20 years.  It was the first sign I ever had.  I mean I used to go around saying, 'give us a sign, give us a sign..."  Then I just looked and saw the whole thing was a sign.  It was the first time I really noticed the sky, grass...things like that and something like a tree had more significance than most of the things I'd ever come across in my life.  After that, we were trying to tell all our friends and Paul and Ringo.  You know, and like it took Paul two years to try it.  I suppose a lot of gaps started happening there.  It really changed me all for the better.  It made me less opinionated and more humble.