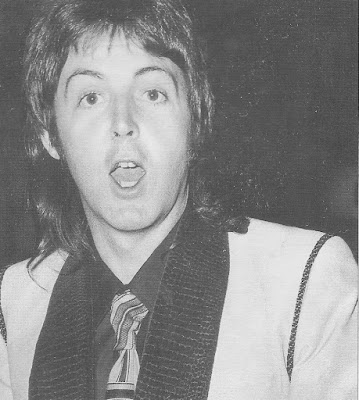 This interview was originally from the May 1974 issue of Disc.


Paul:  At the present, there's no real question of the Beatles reforming as such.  We're far from being enemies, but we're all in to our own thing nowadays.    My daughter, Heather, hasn't even heard of the Beatles.  In fact, I'm sure a lot of Wings fans think Wings is the only band I've ever been in.

I know we're not as famous as The Beatles, but so what?  It took The Beatles four years to become famous.  Wings have only been together for two, and we've done a lot already.

On the other hand, I' wouldn't rule anything out for the future.  I've got to hedge.  I'm always ready to write with John.  I'm always ready to write with anybody who's good.  Look at Ringo's album.  We all had to part in that.  That's what can happen if somebody asks.  And that's all he did.  I've got my visa for the States now, so anything can happen.

Q:  What's happening to your plans to make a cartoon feature film about Rupert Bear?

Paul:  It's in the pipeline.  These things take a long time to get together.  Making a film is a long, long process.  But I've bought the film right for Rupert, and I'm working on it as often as I can.  I certainly don't intend to let it sit on the shelf gathering dust.

Q:  Where did the title song, Maunia come from?

Paul:  It's a name I came across a couple of times in my travels.  Firstly it was the name of a hotel in Marakesh, where the whole band went for a holiday, but it was spelt slightly differently in that case   Then when we were in Lagos, Nigeria, recording Band on the Run, we saw it on a plaque on a wall .

The funny thing is, there was a plaque next to it which advertised a local carpenter.  It read:  Son of Always --- but in the end, we plumped for the title of the track.

Q:  Did you ever recover the Hofner violin bass you played in The Beatles?  (I heard you'd had it pinched).

Paul:  No.  Ever since the early days -- even before The Beatles -- I've had three violin basses.  One was stolen, and I was very upset indeed.  I had a sentimental attachment to it.  but I've still got the other two.  I've also got a Fender Jazz bass and a Rickenbaker.

Q:  Do you plan to work again with your brother, Mike McGear?

Paul:  Yes, I'd love to.  I produced an album for him up in Stockport, and we really enjoyed ourselves.  It's the first time we'd worked together.   It's released in the Autumn, and I expect they'll take a single off it, too.  I can see us doing more things together in the future.

Q:  Why did Henry and  Denny leave Wings?

Paul:  Henry was asked to play a certain guitar lick on one of Denny's songs, and he refused.  The next morning, he phoned up and said he wanted to quit.   As for Denny, I think he was just uptight about recording in Africa. It was as simple as that.

Q:  Who's your favourite artist?

Paul:  I love Stevie Wonder.  I think he's a brilliant musician.  If you remember, there was a Braille dedication to him on the back of the Red Rose Speedway album.  But I'm into all Tamla Motown music.  Especially the drumming.

Q:  Do you feel happier in the studio or doing live performances?

Paul:  I enjoy recording a lot, and always have done.  But I want Wings to be a working band most fo all.  The reason I got bored during the last part of The Beatles era, we didn't perform to audiences.  There's nothing like the feedback you get off a crowd.  It's the best feeling in the world.

Q:  When are we likely to see the Wings film?

Paul:  It's taking a long time to get together.  Actually, it's called the Bruce McMouse Show.  It's about three mice who live underneath the stage we play on.  But while it includes film of our European tour, the mice themselves are cartoon characters.  That means a lot of work cutting the fill in with the animated parts.   Still, we're getting it together slowly.

Q:  How did you get to write the theme music for Live and Let Die?

Paul:  They just rang me up and said they wanted a song that lasted two minutes and fifty seconds.  I sat down at a piano and eventually came up with the tune.  I knew it had to be dramatic because James Bond is a dramatic, larger than life person.

when I had the basic song together, I took it round to George Martin, who used to produce The Beatles, and we worked out the final details.   by the way, the record is two minutes and fifty-two seconds long!

Q:  If you had your time all over again, would you change anything?

Paul:  No, not at all.  I've had a great time.  Even the bad times have turned out for the best in the end.  I've got my family, my farm and my music.  What else can a man ask for?