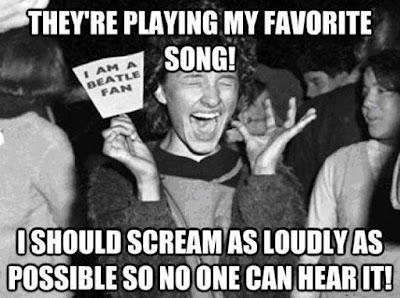 Today is a happy day because 11 years ago this very evening I started this site, Meet The Beatles ... for Real.   Who knew that I'd still be here doing this 11 years later?   Okay -- it isn't TOO surprising since I've been a Beatles fan for most of my life.   Still, many fan-based sights do not last very long, including some that I tried to start in the past.


I want to apologize to all of you that while I have been posting photographs, I have not been doing very well at keeping up with the other aspects of this site.   It has been an entire year since I held a contest, I haven't been posting as many stories as I used to and I am just now returning to Wednesday Reviews.   I've had a difficult year and the best I could do was post photographs, but I am trying to get back to how things used to be.

Before I go into the new contest,  I wanted to inform you all that I just paid to renew this site for another year.   I have been asked in the past if I accepted donations for this fee.  Usually, I use what I earned through Amazon to pay the fee, but this year I did not review many books and so I didn't have Amazon purchases to help me out.    I do have a PayPal donation button set up on the "about Sara" page if you are interested in giving a few dollars to help me cover the cost.

I have been asked a lot lately if I am still working on the Beatles Fan Club book.  Yes!  I work on it ALL the time.  It is coming along slowly but surely.     The next question is when will it be published.   I am not sure at this point, but I am hoping for the summer of 2021.

I have two prizes that I am giving away.

Prize 1:  A black and white 8 x 10 photograph of Wings with Paul, Linda, Jimmy, Denny, and Geoff.  This is signed by Geoff Britton, who was the drummer of Wings in 1974.    Geoff does not do very many public appearances and so if you collect Wings autographs, his is a difficult one to obtain.  I got this autograph directly from Geoff when he appeared at the 45th anniversary of Junior's Farm in Tennessee in June 2019.   I will also include a sticker from the event for the winner.


Prize 2:  Two Cds of Piers Hemmingsen's The Beatles in Canada books.  These Cds are the audio companion of his red and blue books (the blue version has not yet been published).   The red disc is titled "The Origins of Beatlemania!" which tells the story of how the Beatles music became popular in Canada in 1963.   The blue disc is called The Evolution (1964-1970) and tells more about Canada and the Beatles.


If those prizes interest you, then enter the contest!  Here is what you have to do:

1.  Send an email to meetthebeatlesforreal@gmail.com

2.  Tell me in this email what you think is the best song from the original Let it Be album.

On my end, I will assign each entry a number according to the order of getting the emails.  This contest is open to any Beatles fan around the world.   However -- only one entry per household.  I will announce the winner on March 16 after using an online random number generator.  The winner has one week from then to email me his or her address.  If I do not receive the address within one week's time,  the prize is forfeited and a new winner will be chosen or the prize will be kept for another contest.