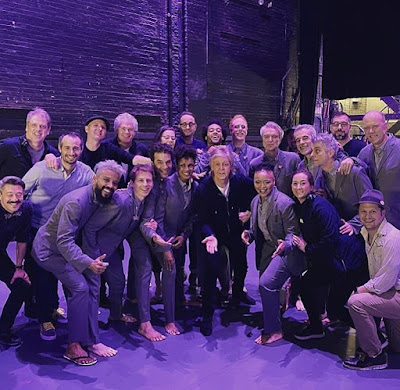 Paul has been seen out and about in New York City the past few days.   He has been seen at an Eagles concert and here he is with the Cast of American Utopia on Broadway.   Now I try to keep up to date with what is playing on Broadway because I love musical theater and I have to say that American Utopia wasn't one I was familiar with at all.  This is what I found online from The Hollywood Reporter:


David Byrne's American Utopia — a dazzling, one-of-a-kind theatrical concert that combines songs from his Talking Heads art-rock heyday with selections from across his eclectic solo output, all of it woven into a joyous call to arms to rewire our brains and connect both with our fellow humans and our ailing planet

This reminds me that Paul is supposed to be writing a musical version of "It's a Wonderful Life."  We haven't heard anything about this in quite some time.  I hope it is still in the works.
Posted by Sara S. at 4:40 PM