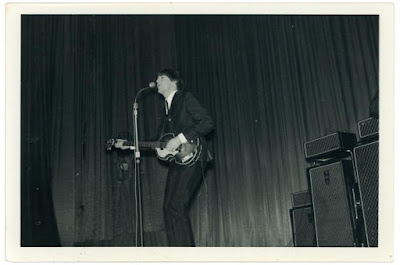 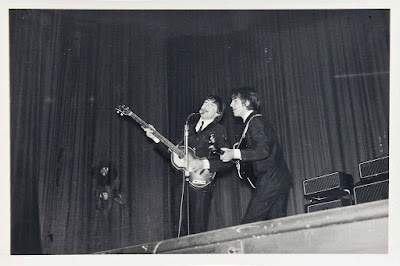 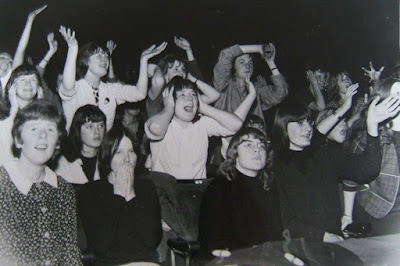 This letter written by Jane Dunn was published in the April 1970 "B.S. Sheet" as she was looking back at the Beatles concert she went to.


Oh, so I didn't tell you of our Beatle concert?  Hard luck!  No, really, I'll tell you.  No, I didn't take any photos (as in 'you're not allowed to take cameras into the theatre, luv. You'll have to leave it here.').  Anyhow, "D" day arrived -- as I say 'D' day -- we had right up until 6:30pm to wait.  Itw as Friday, October 16, 1964.  It was their second visit to Hull.  The first one was in 1963.  I was only 13 then and mum said I could have gone, but there was one problem -- over 800 fans queuing for 48 hours for the box office to open.  Over here you're not allowed to book tickets by phone or post.  So I never went and neither did 100s of others.  Anyhow in 1964, I told mum that even if it meant queuing for 48 weeks I'd do it.  This time however they were crafty.  They never announced the date that the office would be open until in the newspaper on a Wednesday night (about a fortnight before the actual concert) and it would open the following morning.  This was to stop the queues (ha ha) foiled again methinks.  Boy was there a queue!   So much so that they opened the office at one minute past midnight to get rid of the congestion.  We were up on the balcony - John's side.  10/ a seat (they ranged from 15/- to 7/-) the most expensive concerts are the ones with The Beatles on of course.

This particular Friday was also Voting Day, which involved half the Police Force.  It was also the week of our Hull Fair and this involves 100s of Police too.  But there also had to be 100s at the ABC Theatre, mostly mounted (on horses).  Guess which event gave them the most trouble?  He he!  1964 was when I was in the fourth year and a Friday afternoon we had needlework all the time.  Our teacher was the greatest and was going to the concert herself.  Well, we drove her mad (all but two of us were going).  We were telling her how long to the exact second there was to go!  4L15pm finally came and everyone rushed out.  I live very near school so Elaine and I dashed home.  It was the "era" of denims and crownecks, so we quickly changed and went straight there!  The bust just couldn't get there quick enough.  First, it got caught up in the Hull Fair crowds.  Finally, it got to some traffic lights and we were so fed up we got off thee and ran all the way and beat the bus by an hour!  You've never seen anything quite like it!  The whole city of Hull was Beatle mad!  Thousands were milling around -- only about 1% could possibly have got tickets.  All the nearby shops had iron gates absolutely covering them (nice to know we were trusted).  We got conned about 100 yards from the stage door by a phony program seller.  In the middle of paying him, THEY arrived.  100 yards away from them!  We just missed it.  Linda Stockman came running up to us and all she could say was, "I've touched George.  I've touched George!!"  We wandered around then decided it was time to go in and so did everyone else it seemed.  We passed a figure sat on the curb edge.  It was another girl from school, Linda Joliffo.  she was sat hunched up crying.  She had lost her ticket.  Her father came up in the car to say they'd looked everywhere but no luck and she'd better come home.  But she stayed.  Poor girl, to this day she swears if she ever found that ticket she'd kill herself.

Anyhow, the concert.  Well, the atmosphere was marvelous.  Who was on with them?  I only remember Sounds Incorporated (fantastic), Mary Wells and Tommy Quickly.  I nearly wept because Quickly was so awful.  I shouted out and told him so.  He was the act before THEM, and he was sooooo depressing that I found myself worrying in case I was disappointed with the Beatles.  Next thing I know I jumped seven feet in the air, my tonsils made room for my heart and my stomach did 17 sommersets -- THEY were on!   There were some young teachers behind us and they lent us their binoculars.  I'll always remember looking at Paul and George, almost crying with laughter at some joke -- don't ask me what!  I've never seen such a beautiful sight --ever!  I can't remember what they sang (I couldn't hear anyway).  I know Ringo sang a solo.  I remember the solo spot on him and the other three in semi-darkness huddled together at one corner of the stage.  John wanted to sing "Hello Dolly" and kept attempting to do so in the "spastic" voice and pose, you know which one I mean -- the clawing at space, etc.  The others wouldn't let him sing it and in the end, he ended on his knees at Paul's feet, begging him.  all I know is I've never felt so utterly happy and full and ecstasy at the same time.  I cried the whole concert-- oh well!

Afterward we hung around to ages -- hoping.  Elaine and I seemed to be going in the opposite direction of everyone else.  A policeman came upon us and demanded what we were doing so I said we were going for a drink.  We went into the Milk Bar and got (wait for it) two free drinks of water!  We went off again and found Linda still sitting on the curb edge crying.  We went around the side of the theatre and looked up and a toilet window was ajar and (this is the honest Gospel truth); someone was using it (the toilet, not the window).  elaine and I stood gobsmacked.  We'll never know who it was unless we see again the -- oh forget it!  It took me ages to get over that biggest night of my life.  What I wouldn't give to live it all again.