A fan named Don Pupke post the following photograph and story on Facebook.   Do you know the lady in the photograph with Paul?    I am sure we can find her! 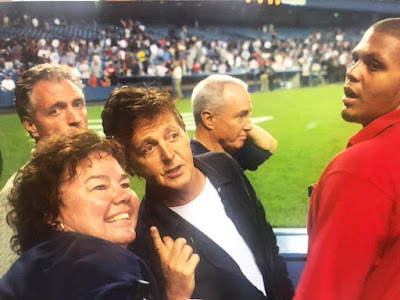 
In July 2003 I went to a Yankees game with one of my buddies and we had the good fortune of sitting directly in back of Paul McCartney and his (then) wife Heather Mills. I think they were sitting with U.S. Senator Chris Dodd.
The seats were close and throughout the game, we had small talk but I tried to treat him just like I’d treat anyone else who sat near me at any game.
I was impressed that he was a real fan and stayed for the entire game. At the end of the game we had to wait for the crowd to clear a bit before leaving and I found myself standing and talking to him about baseball. At that point, I figured it would be okay if I asked to take a picture with him. He said “sure”.
One thing you need to understand is that in 2003 there were no camera phones so you had to have a camera and film to take a shot. I happened to have a camera.
Just as we were about to take the picture, a very nice woman came running toward Paul calling his name. He looked at me and said, “let me take a picture with her and then we’ll get our shot.” The only problem is that she didn’t have a camera. I told her that I’d take the picture. As soon as I took the picture I heard the whirring sound of the film rewinding. My heart sank. No more film. No more pictures. I settled for a handshake, a pat on the back and a memory of meeting Sir Paul McCartney. Oh, and I also have a picture of Paul with a woman I don’t know.
This is the picture.
Afterward, I asked her if she had an email address so I could send her the picture. She didn’t. She gave me her home address - somewhere in Kansas- as I recall but, unfortunately, I lost the slip of paper.
So now I have this picture of Paul McCartney with a woman from Kansas ( might’ve been Nebraska, Iowa or Oklahoma) and no way of getting this to her.
I’d love for anyone and everyone to help me find her so I can get this photo to her.
Can anyone help? I’d appreciate it if you could share this until we find her. Thanks.
Posted by Sara S. at 7:27 PM