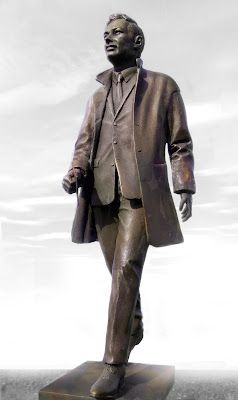 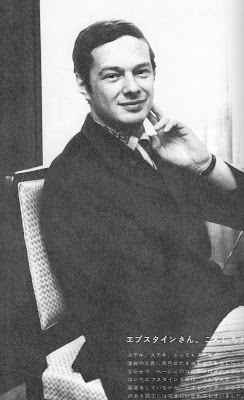 There isn't a Beatle fan alive that wouldn't give Brian Epstein credit for giving The Beatles what they needed to become the famous group that we all adore today.    Brian was such an important part of the Beatles' story that it is almost ridiculous how he has always been an after-thought when it comes to getting the recognition he deserves.     I am so thankful that Eppy is in the Rock n Roll Hall of Fame for managing the Beatles and still find it embarrassing that he wasn't inducted the same year as the boys.    It took countless petitions and campaigns over the decades before he finally received that honor.

In Brian's hometown of Liverpool, there is very little mention of him.  I have heard people ask, "Why doesn't Brian Epstein have a statue?  There is one for Cilla Black.   Shouldn't Brian have one?"   Yes.  Yes he should!   We all should be able to travel to Liverpool and see the John Lennon Statue on Mathew Street and the Cilla Black one outside of the Cavern as well as Billy Fury and The Beatles statue down near the Mersey  (and we will continue to pretend that the ugly Beatles statue at Cavern Walks isn't a real thing) and also see a Brian Epstein statue.   To me, that is a given.

The group that brought the beautiful Beatles statues has a campaign going to donate towards a statue for Brian.   Sadly there are less then TWO DAYS left to donate and it feels as if the world as forgotten about Eppy because it isn't close to making the goal.   However -- I believe in Beatle fans and it isn't a lost cause.

Please donate a few pounds (or dollars or Euros or whatever) towards Brian's statue.   There are some nice incentives for each level that you donate.   From your name being in the Hall of Fame to a signed book, a Brian tour of Liverpool and much more.   If you are a Beatles book collector, then you might as well donate toward the cause and get the book, right?

Here is where you go to donate.   I hope to meet you at the new Brian statue in Liverpool in the near future.