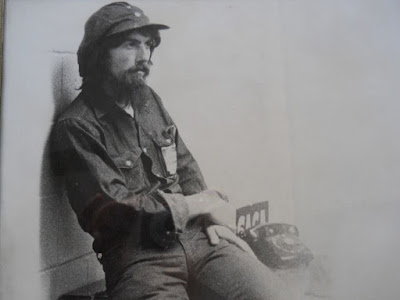 I have been looking through an old scrapbook from 1970-1972 full of Beatles news clippings.   There is this story about George and some legal issues he had while driving in January 1971.  I had never heard about this before and thought I'd share the stories with all of you.

Beatle George Harrison ignored the hammering on the roof of his car.  He thought it must be one of his fans.  But in fact, it was a policeman trying to draw his attention to the fact that he had caused a traffic jam in the centre of London.

After that, it was alleged yesterday at Wells Street magistrates' court, Harrison drove three times at the constable.

Mr. Michael Holmes, for the prosecution, said that Harrison was driving in Orchard Street near Selfridge's store, on September 3 last year, when he advanced into a "yellow box" and caused a traffic jam.

When Constable Stephen Gardner spoke to him about this Harrison began to slowly move forward.  "The officer walked alongside the car and told Harrison to pull over.  But the car continued forward and the constable went in front of it and indicated him to stop.  But he was bumped on the knee.  Three times he signaled him to stop and three times he got bumped."

Constable Gardner then stood in front of the car and refused to move.   Defending Harrison, who did not appear in court, Mr. Martin Polden explained, "the policeman was standing on the traffic island trying to draw his attention by hammering on the roof.  Being a Beatle, he is often subjecte to this treatment by fans and did not realize it was a policeman."

Magistrate Mr. I. McLean asked, "Despite what one reads in the newspaper, I suppose he is still a person of considerable means?"   Mr. Polden agreed.

The case was adjourned until February 23 so that Harrison, who lost his driving license while moving to his new home at Henley-on-Thames can produce a duplicate.

Beatle George Harrison drove his Mercedes car three times at a policeman on point duty who signaled him to stop, a court was told yesterday. The policeman was hit on the knee,  but not hurt.

He just stood firmly in front of the car and refused to move, said Mr. Michael Holmes, prosecuting at London's Wells Street Court.

Harrison, of Savile Row, Westminster, pleaded guilty through his solicitor to driving without reasonable consideration in the West End in September.

No evidence was offered against him on other summonses alleging careless driving, failing to stop for a policeman and driving into a road traffic box without the exit being clear.

Mr. Holmes said Harrison drove the Mercedes into a busy road junction at Wigmore Street and blocked other traffic.

PC Stephan Gardner spoke to him and was told, "I see no box."

Harrison then drove his car forward and PC Gardner walked alongside and asked him to drive to the off-side of the road.   The Beatle refused twice, so PC Gardner walked forward and stood in front of the car.   Mr. Holmes said, "Harrison advanced his car slowly and steadily and it hit the officer's knee.  Again Harrison drove into him while the officer had his hand raised.  Then Harrison drove against the officer a third time.  The officer was not hurt but a bit shaken."

Other police arrived at the scene and spent 15 minutes trying to get Harrison's name and address said, Mr. Holmes.

He was heavily bearded but eventually, PC Gardner recognized who he was.  Harrison's solicitor, Mr. Martin Polden said Harrison did not mean to hurt PC Gardner and was a "very mild-mannered man."

The sentence was postponed until February 23 because the magistrate, Mr. Iain McLean was told Harrison could not find his driving license.

Harrison's "My Sweet Lord" is No 1 in Britain in the New Musical Express pop charts, No 1 in America and No. 1 in Australia.

Beatle George Harrison was banned from driving for a month and fined 35 (pounds) today for a driving "miscalculation which developed into a misunderstanding and ended in a misdemeanor." That was how the incident in which he slowly drove his Mercedes three times against the legs of a policeman in West London was described by his solicitor to Wells Street Magistrate, Mr. Ian McLean.


Harrison, of Kinfauns, Esher, Surrey, pleaded guilty and was ordered to pay 15 (pounds) costs.  His lawyer, Mr. Martin Polden said he would appeal against the driving ban.

Harrison, who was not in court, pleaded guilty to driving without reasonable consideration.  Mr. Polden said Harrison had been trapped in a traffic box at a Wigmore Street junction.  Although moving slowly, he had driven three times into the legs of a police officer, who banged on the roof of the car to try to stop him.

Harrison's miscalculation was in not stopping immediately but trying to pull to the near side before doing so.  Until he saw the officer in front of the car, he did not know he had committed an offense.

His car radio was on and he could not hear the officer shouting.

Mr. Polden added, "He took the whole business unpassively rather than arrogantly."

The magistrate, Mr. McLean said, "In my view, the most effective way of dealing with cases of this sort, whoever the driver may be, is by means of a short comparatively sharp disqualification."

George Harrison, 27, one of the Beatles, was disqualified from driving for a month and fined 35 at Wells Street magistrates' court, London, yesterday for driving without reasonable consideration in the West End last September.   Mr. Iain McLean, the Magistrate, said: "In my view, the most effective way of dealing with cases of this sort, whoever the driver may be is by means of a short, comparatively sharp disqualification."

Harrison, who did not appear, was ordered to pay 15 costs and had his license endorsed.   His solicitor, Mr. Martin Polden, gave notice of appeal against disqualification.

Harrison of Savile Row, pleaded guilty when the case was first heard four weeks ago and the magistrate postponed sentence because Harrison was said to have "lost his driving licence."

The prosecution had stated then that Harrison drove his car on to the busy junction of Wigmore Street and Orchard Street blocking traffic.  When stopped by the Pc, Stephen Gardner he drove the car forward with the constable walking alongside and twice refused a requestion to drive to the offside of the road.

Pc Gardner walked forward and stood in front of the car and Harrison advanced the car slowly and it hit the officer's knee.  He drove against the officer three times.

Police spent 15 minutes trying to get his name and address, but Harrison, who was heavily bearded, was finally recognized.  Mr. Polden told the magistrate yesterday that Harrison was trapped in the boxed area.  He was driving his wife's Mercedes, and drove slowly forward.

The policeman believed the driver was taking no notice of his signal.  Harrison had the car radio on and did not hear the officer speak to him.   When the policeman ran in front of the car Harrison realized for the first time he was being requested to stop "for reasons quite obscure to him."

He decided to pull in to the near side and started to turn not realising he was being discourteous.  "He should have stopped, but it stemmed from a misunderstanding.  That is why he pleaded guilty."

"Mr. Harrison's nature is such that the arrogant level of driving does not really enter into it.  As far as a man in his position can have, he has a sense of humility.  He is not capable of deliberately driving into a police officer, causing him to hurt.  He took the whole business impassively rather than arrogantly."

Referring to Harrison's fifth week at the top of the hit parade with his song "My Sweet Lord.," Mr. Polden said, "the song is aptly named because he does have a sense of religious feeling."

He asked the magistrate not to ban Harrison from driving.  "This started as a miscalculation, developed into a misunderstanding and now before you as a misdemeanor.  He made a mistake which he will not repeat."

After disqualification was announced, Mr. Polden requested that it should be suspended pending an appeal.  Mr. McLean agreed that he had the power to lift the ban until an appeal and said he would consider this when the letters of appeal were available.