Yesterday - A movie review (with spoilers!) 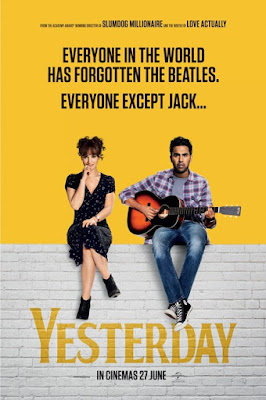 WARNING!  IF YOU DO NOT WANT TO BE SPOILED ABOUT THIS MOVIE, DON'T READ!!!!

Like many of you, I saw the highly anticipated movie, Yesterday.    The idea behind the film is interesting.   Something happens (no one really knows what) and several things that are part of our culture are no longer remembered by anyone but one guy named Jack.    Things such as cigarettes, Coca-Cola, Harry Potter and of course The Beatles were all unknown.    Honestly, the world Jack wakes up to is literally my version of Hell -- no Diet Coke or Beatles?   No thank you.

First and foremost, this is not a Beatles film.   It is a romantic comedy.    It is the typical story of a guy that has the woman of his dreams right in front of him and doesn't realize it until it is too late.  Then said guy does whatever it takes to get the girl.    I think any major band could have been the focus and the story would haven't have changed.

However, The Beatles are the focus and it is the Beatles' music that made this film so enjoyable for so many people.    Actor, Himesh Patel performs all of The Beatles music himself in the film.  He does a good job keeping the songs close to the originals.    Since he is apparently the only person that remembers the Beatles, his character, Jack "writes" all of The Beatles songs and becomes famous because of his amazing songwriting.    The idea behind this is that The Beatles' songs are so amazingly good that it doesn't matter who is performing them.   They will always be hit songs.   Is this true?    I can see some of the songs being loved by the masses even if they aren't sung by The Beatles, but all of the songs?    Isn't part of what made the Beatles so good was the harmonies and musical abilities of the four band members?   Could one person and a guitar REALLY make all of the songs popular?

As the movie goes along, we discover that Jack isn't the only person that remembers The Beatles.  There are two others out there!   They meet Jack and instead of being mad that he is taking credit and making money from the songs, they are delighted that he is sharing the music with others.   You later see them dancing in Sgt. Pepper jackets (which makes no sense to me at all...but it is a fantasy film).

The scene that no one wants to talk about because they don't want to spoil the film happens towards the end of the film.    The two others did some digging and give Jack an address to a man living on a beach.   The man was none other than John Lennon.    When you see "John" open the door, it is a little shocking.   The actor playing him DOES look like what we think John might have looked like if he were still alive in 2019.    The hair, the nose, the glasses, the voice.    Many fans have said this was a very emotional scene.   It makes you think about how John should still be alive and if he wasn't famous, he wouldn't have moved to New York and he wouldn't have been murdered.    This John sits on a boat named Imagine and gives advice to Jack.  Advice that we like to think John would have given him if he were alive today.    It was a poignant part of the film, but it also gave me a creepy feeling.

One thing fans are going to like is all the little Beatle-isms sprinkled throughout the film.   The album cover is a dead ringer for the famous Paul McCartney selfie from when he was a teenager.   As a fan, there are jokes in the film that others might not catch.   I appreciated the nod to us because the filmmakers had to realize that one of their main demographic was the Beatle fan community.

I went with some non-Beatle people to see the film and they enjoyed it.   It is a nice film.  Very predictable plot, but still a nice little film.    It isn't going to be my all time favorite movie, but I would watch it again.

There is also a soundtrack now available if anyone is interested.