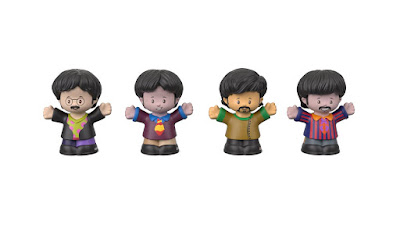 I just bought what has to be the cutest Beatles item of 2019.    If you were a kid in the 1960s or later, you most likely remember playing with Fischer Prices "Little People."    They usually came with a playset, like a farm (with a barn that mooed), amusement park, school, etc.    In 1997 the Little People changed from being small peg-like figurines of people to "chunky" style people because well chocking was an issue with these toys.

In the past 20 something years, kids have loved playing with the Little People.   I worked at a Day Care in the early 2000s and I remember kids fighting over the Little People.    By that time, they had people of every race and depicting just about any career you can imagine.    Also, well-known characters began to appear.    The original Little People had Sesame Street characters in the 1970s, but in more recent times you may have seen the Disney princes and princesses available. 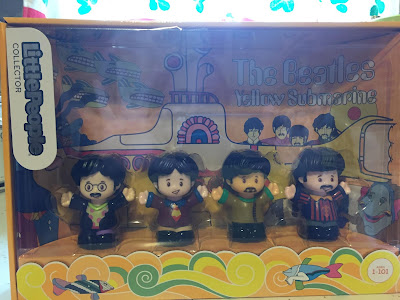 Not only are the toys themselves adorable, but the packaging is awesome.   The set comes in a yellow box that is decorated with things from the Yellow Submarine movie.    You don't even need to open it up because it makes a great display for your Beatles collection right in the box.    The back of the box is also cute because it shows the Yellow Submarine Little People performing. 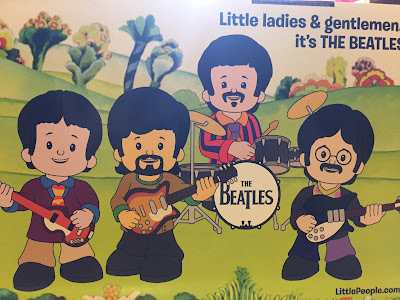 On the box, the recommended ages for this toy is 1-101.   So it literally is meant for anyone.  If you have a child, these guys would be really fun to play with.   I can just picture sitting and acting out scenes from the Yellow Submarine movie.   Ringo -- don't press that button!    If you are like me and like collecting Yellow Sub items, then this is a must-have for your collection.

If you have children or grandchildren AND you collect Beatles things, you might need to buy two sets.   One to open and play with and another to display.   These sets cost $20 each, which isn't too bad when you think it is only $5 a Beatle.     I bought my set from Amazon because I didn't want to go searching all over various stores for them.   I have a feeling that these are going to sell out quickly, just like the Hot Wheels cars did last year.