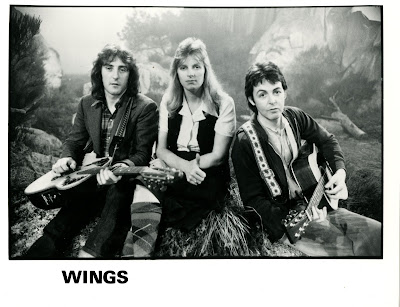 Paul:  No.  It's just independent actually.

Denny:  The whole thing has been to try and make a few singles as well as albums.  All we've ever done is make albums and put out singles from them, which is a bit boring.  We'd rather have something separate.

Paul:  This one didn't really fit with the album.  We'd got enough stuff; enough new tracks -- we'd got more than we need, kind of thing.  We just thought it seemed very singley.  When we'd done it, all the pipers said, "Ah, yes, got to be a single, that one."  It was up to them, so we had to do it.

Scott: Wings is now you and Linda and Denny.  Where are you going to go from there?  I imagine that next time you go out on tour, you're not going to try and do it like you did it before.

Paul:  Maybe, but we'll wait and see. All we've got planned at the moment is to finish this album, and then we haven't bothered thinking about it beyond then.

Scott:  It was so superb that last tour.  The concerts, everything was just perfect.

Scott:  Even though it was perfect, I imagine you wouldn't want to go out and do it again.  What would be the point?

Paul:  Oh, we wouldn't do the same.  We're interested now in doing more the small clubs.  Plastic bags on our heads -- that sort of thing.

Scott:  What about the repackaging ripoffs?

Scott:  All the old stuff.

Paul:  If I was still in the Beatles, I'd be worried by all of that.  I'd care how they repackaged it and how they did it all, but I'm not in them, and the record company has all the tapes, and they're allowed to do it.  I'm more into the new stuff.  I can't be bothered.  To tell you the truth, I haven't even heard "Hollywood Bowl."  Terrible admission.  Geoff keeps telling me to hear it.  He did it.  He says it's good.

Scott:  Did you hear the Hamburg Tapes?

Paul: No.  I've got a lot of those tapes anyway in my private collection.  Not the repackaging.  I've got the original demos.  I've heard them.  I mean, I must have heard them.  I was on it.  I don't knock the old Beatles stuff.  I love to hear it on the radio.  I think the Beatles, actually, we always aware of having all this unreleased stuff, and I suppose we always thought if anything happened to us, like Buddy Holly, someone would bring out all the old tapes, rehashing them, putting strings on them, so we were always careful never to have anything unreleased.  By the time we'd finished, I think we'd put out everything we'd recorded -- very nearly.

Scott:  How about the Sgt. Pepper film?

Paul:  I've just heard that George Burns sings "Fixing a Hole."  Sounds interesting.  Geoff Emerick is working on it.  He's broken off from it to come and do this album for us, and he likes it.  He says it's going to be great.

Scott:  You're really into collecting catalogs, aren't you?

Paul:  Well, when you earn money you've either go to give it to the government or spend it on something.  It's Catch 22.  I don't want to buy a lot of big buildings, so it was a normal thing to do.  Norman Petty just happened to be selling the Buddy Holly stuff.   EMI was interested, Allen Klein was interested, and secretly, I think that is what got me interested.  I want to have them, not to be greedy, but to look after these songs and do something for them.

Paul:  Yes, actually I like that stuff, it really shows that we were a little rock group to start off and we went towards ballads and more complicated psychedelia but all these tracks were just rock.

Scott:  Were you more of a Holly fan than a Presley fan?

Paul:  No, equal, no all of them really.  The thing about Holly was that if you were a new young songwriter, it was easy to pick up on his stuff because there were never many chords.  Elvis's sometimes had very many chords, not his early stuff, but when he started doing "Love me Tender."  Buddy's stuff was all in A, D, and E or maybe E, A and B, and we knew those chords, so the first 50 tunes we wrote were all like that.

Scott:  There's a Wings movie that you're fiddling around with at the moment.

Paul:  Yes, we shot some things on tour when we did the "Wings Over America" tour, and some of it's very nice, but the sound isn't that good.  We're working a lot on the soundtrack, trying to get it sounding better.

Scott:  This will be for TV?

Scott:  But a long version, I heard, for the fans?

Paul:  Well, I don't know.  What we thought was first of all put together a kind of documentary-cum-concert for TV and then if the concert stuff really looks good, then we'll put all that together for just a concert film.

Scott:  What kind of music are you listening to at the moment?

Paul:  Not much, actually, we're working on our own stuff, and by the time I get home, I don't want to listen to much.  I just switch on the telly and switch off my mind.  I haven't bought any new albums for a while, actually.  My daughter's into punk, so I hear a bit of that.

Scott:  Does it make any impression?

Paul:  It's alright.  I quite like it.  I like what they're doing -- the attitude and I like the look, but for me, it's just another style.  It's not my style.