George Driving Up To His Home 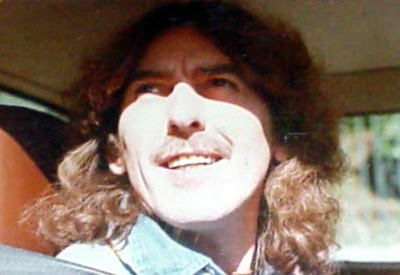 It was a beautiful sunny day and just perfect to go to Henely.  so we did.  Iw as with my friends from Germany and New York.  As we approached the big gates we didn't hesitate to go up to the castle.  The grounds were green and breath-taking.  I couldn't believe how beautiful it really was.  When we reached the front I noticed a familiar site.  A sign leaned against a tree that was from the film and said "Crackerbox Palace".  I  was so amused I had to take a picture.  There was no one around as far as we could see, so we walked on to find him.  The house was another unbelievable sight.  Old and mysterious.  We turned to our left to see what we could find and as we passed a big window I could see pictures of George in concert and as a little boy with his brother.  And a huge black Dark Horse statue was in the middle of the room.  A whole room was filled with goodies.  I've seen the Dark Horse statue at our L.A. Beatlefest.  Then a voice from above was asking us what we wanted.  We pleaded with him to just let us see George.  I must say we were very nice.  It was Kurnar Shankar who lives there and he backed down to our politeness and said he wasn't there.  So we all agreed to go away and just be thankful we had come this far.

As we were leaving I heard a voice call to us, "Hello!  Hello!" It was Olivia and she didn't seem happy to see us.  Again with our charm she backed down and advised us to "go have lunch and come back in two hours, then George will be out."  That's when I realized that if we would have made a right instead of a left at the front of the house we would have ran smack into George and Olivia sitting in the sun in their backyard.  Olivia had on short embroidered cut-off jeans and a summery blouse.  The temp. was about 75 F.  She was very nice.   I especially liked her because after hearing her California accent it made me feel like home.

So off we went to have lunch at a pretty quaint Henely restaurant.  We were looking forward to our excitement.  Back at the gates we waited, waited and waited.  We began to think we were too late.   Then a blue Mercedes came rolling in and I was determined to find out if this guy saw George.  It came back out shortly after and I asked.  He said yes, George and Olivia were coming out soon in a brown Porsche.  Sure enough, it came rolling down his little road and we all got ready.  He stopped with a beautiful wide grin and the pictures went snapping.  He seemed shy as usual by very sweet and gentle.  He wanted to know where we were from and everyone blurted out their city or country.  When he hard me say California, he looked right at me and smiled as if to say, "Oh California, nice place!"  It warmed my heart so I took his picture.  altogether I took 10 close-ups.  His hair was curly and shined like gold.   He had a denim embroidered Levi jacket and was strapped into his seat, ready to take in the Grand Prix.  We hoped he was gonna be careful.  I asked him when he was coming to L.A. and he said, "probably October."  He didn't lie.  But we missed him.   Then I asked when he was going to tour again.  "Everyone is waiting in the States for you to tour."  He looked straight into my eyes and again gave me one of those melting smiles and he seemed to be very happy and flattered to hear that.  But he said, "I just can't get into the music right now."  I didn't really know why he said that because he can do no wrong with music as far as I'm concerned.  As all of this was going on I was on my knees clicking away.  George finally drove away and we watched his car go out of sight.  I couldn't help but think how sweet of a guy George really is.  John is usually the one for me but after seeing George and just getting a taste of his kindness it is hard to separate between the two or four, or whatever.