A special guest at Friar Park 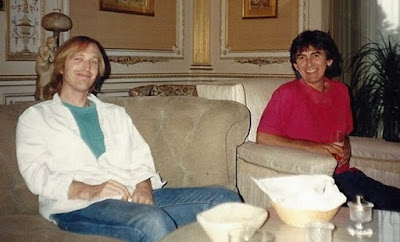 This photo and story were shared on Instagram by the legendary skateboarder, Tony Hawk.


"We were doing a demo near London during a Bones Brigade tour in 1990 when a kid asked if we’d like to come to his house for dinner. It was an unusual request, but he had confidence and explained that his dad would be excited to meet us. We quickly learned that his name was Dhani Harrison, and his dad was the legendary George Harrison. We agreed, and headed to his place (castle) after the demo. His mom Olivia was a most gracious host, offering us homemade pizza. She proudly gave us a preview of a charity album she organized to benefit Romanian orphans that featured the Traveling Wilburys, who would be recording at their home studio the following day. We were led into the living room where George and Tom Petty were fixated on the World Cup finals. It was surreal. Dhani showed us his room and some of his guitar techniques he had learned from Bob Dylan, who was scheduled to arrive later that night. Dhani and I have remained in contact to this day, and it has been inspiring to see how him forging his own way as a talented musician while keeping the grace and humility of his legendary father."