Eight Days in Montreal with John and Yoko 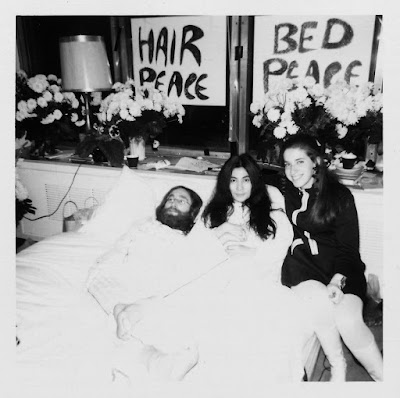 
From the minute that John and Yoko's plane touched down in Montreal, we were looking forward to seeing them on local TV and radio shows.  We were absolutely certain there was no chance of even meeting them in person.  But, that same evening, by the divine intervention of one university press card, and one little Kyoko, we obtained entrance into room 1742, official Beatle room at the Queen Elizabeth Hotel.

We thanked Kyoko for her influence with the right people and nervously waited to meet her famous mother and step-father.  Yoko, clad all in white, came in to greet us.

We made an appointment for an interview for the following day.  As we were leaving, we were surrounded by several frantic disc jockeys who asked us if we would mind doing a 10-minute interview with John and Yoko on the air.  Trying to appear nonchalant, we jumped at the chance.

We made our way into the Bed-In room and equally nonchalant, we tripped.  Looking up at John, spiritually and otherwise, we introduced ourselves.  Having been Beatle fans since the "Love me Do" days, we were so excited that we were completely at a loss for words.

John realised what was the matter and went out of his way to put us at ease.

As there was a three-hour delay till the radio show, we had a long chat and got to know John and Yoko quite well.

After the broadcast, we were asked to return the next day and to join the Montreal entourage.  We thanked John and told him that we had missed a great movie to be with him that evening... "Hard Day's Night."  Neither he nor Yoko had any idea that it was on telly, and John was very disappointed because he said that he would really have liked to see it again.

We left to the strains of "Can't Buy Me Love."  Early the next morning, we collected Kyoko to take her out for a walk.  Kyoko is Yoko's daughter by her first marriage.  During the next seven days, we really got to know and love Kyoko.  She's a vivacious, high-spirited five-year-old with a vivid imagination.

Returning to the hotel, we arrived in time to see John doing an American TV broadcast.  When quizzed about the peace intentions of the other Beatles.  John said that "George is also an active pacifist, but is not as big a show-off as I am.  He has to do his own thing for peace."  Paul, on the other hand is "an intellectual pacifist.  He talks about it."   "Ringo," said John, smiling, "lives peace."

Speaking of living peace, John and Yoko are perfect examples.  They have a really tremendous mutual understanding and love that is almost unique.  John told us that he's "very possessive and jealous of Yoko.  I am even angry that she was born in her mother's womb instead of mine."

On a lighter note, John quipped that they both married foreigners.  Yoko agreed with us that we are living in a global village -- a la McLuhan.

The seven phones in the suite were perpetually ringing. Thomas and I helped to answer them.  Have you ever spoken to eight different Paul McCartneys and six assorted Ringo Starrs in one afternoon?  When we realised what people will do to get in to see John, we were truly grateful for our golden opportunity.

Many of the "beautiful people" paid homage to the Beatle bed-in.  Tommy Smothers of the Smothers Brothers, came up to visit, and after hours of peace chitchat joined songstress Petula Clark to exchange the latest entertainment gossip.

By now, it was nearing midnight and John decided that he wanted to record his newly written song "Give Peace a Chance."  Tambourines were needed, and naturally, we turned to the Salvation Army for help.  They were fresh out of tambourines, so we turned to the Consciousness-Expanding Hare Krisna Society who obliged.

Then, after one rollicking jam session, "Give Peace A Chance" was born.  Amongst the guest artists on his cut were  Tom Smothers, Petula Clark, Dick Gregory, Rabbi Geinburg and varied members of the hotel staff.

After the tiring recording session, we called to get some rest.  A good thing, too, because the following day roved to the most hectic.  One thousand youthful peace marchers gathered in the hotel corridor for a view of the famous Beatle, John promised that he would address them on the radio if they dispersed.  Both sides kept their word, and relative calm was restored.  Another example of John's concrete contribution to peace occurred several hours later.  By long distance, telephone hook up to California Radio.  John counseled Berkley marches to avoid violence.  They agreed and as what could have been a serious situation was averted.

Let us clear up any misconception you might have about John and his peace mission.  John knows that his Bed-In won't end the Vietnam war overnight.  But he is trying to change people's heads so there won't be another Vietnam-type confrontation sometime in the future.

The week seemed to go in a flash.  Looking back, it was hectic and tiring seven days, but it was a week that we'll never forget.  To show his gratitude, John gave us various gifts.  As Kyoko told John when he was tucking her in for the night, "It's great living with a star.  You never get bored."