The Roof (the Beatles Final Concert) - A Book Review 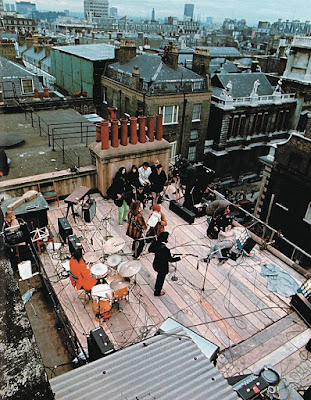 The book The Roof:  The Beatles Final Concert by Ken Mansfield is a real treat for Beatle fans both hardcore and casual.    Ken Mansfield, of course, is the "guy in the white jacket" that you see on the rooftop while the Beatles are performing on January 30, 1969.

Ken was much more than a lucky guy in a white jacket on a cold rooftop.   He was the U.S. manager of Apple Records.    In the book, he tells the story of how he got the job and explained his relationship with the Beatles and the rest of the Apple folks.

What makes this book special is that it is Ken's story.   It isn't a historical telling of the Let it Be sessions and the rooftop, but Ken's personal telling of the events from his point of view.    He doesn't white-wash the story either.   He tells of how uncomfortable things had gotten between the band and how he noticed a change once Billy Preston came onboard.

Ken also digs into the history of the Mayfair area of London (where the Apple Building was located) and the history of 3 Savile Row itself.   It is actually very interesting!

The biggest part of the book deals with the performance on the rooftop itself.   Who was there and who wasn't?   Why was Ken wearing a white jacket?    Just how cold was it up there?    What about those bobbies?      Ken answers a lot of questions in a fast-paced manner.   It makes the book easy to read and very enjoyable.

The book ends with chapters highlighting some of the unnoticed heroes of Apple that were good friends with Ken.