Another story from London written by Val Furbish for the Harrison Harold fan club newsletter.  This one was published in the November 1970 issue. 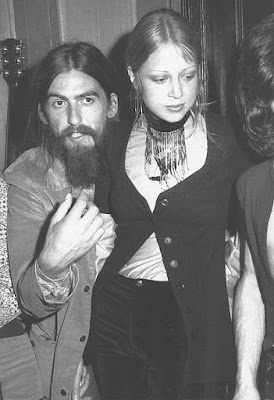 Before I get started on George, I must speak on behalf of Ringo and his new LP 'Beaucoups of Blues."  Many people have told me the other Beatles should never have let Ringo sing because it led him to believe he could sing.  Well, I love Ringo's voice and I love both his albums.  Just because he doesn't sing YOUR kind of music, rock or progressive or what have you, it doesn't mean he can't' sing.  If you people who say he can't sing knew anything at all about music you'd be quite surprised to learn what a beautiful voice he does indeed have.  He has a very natural voice and it's easy for him to sing when a song is in his range.  I bet those of you who laugh at his singing can't even carry a tune yourself!  Alright so you can't appreciate his style of c & w and oldies, but don't knock him down cos you think you're cool!  Ringo does realize that not many Beatle fans can dig his music and so he is always very pleased when many Beatle fans can dig his music and so he is always very pleased when someone like me or Marcia tells him we bought his album and love it tremendously.  His smile tells you he's pleased and appreciates the fact that you bothered to tell him.  I suggest you people listen for yourself rather than reading the cheap reviews in Rolling Stone and letting them decide you hate it!

October has been a very good month for the George fan in London.  If he wasn't at EMI or Trident, he was at Apple.  For the first 2-3 weeks of the month, he was in and out of both EMI and Trident almost every day.  Towards the completion of his remixing of his solo LP, he began coming to Apple every day.  And all the times at Apple in such great moods.  He'd come out and talk for a half hour or so.  About the new Bob Dylan LP he's on, he said, more or less, that he was not on one record, I think it was "Wigwam" which everyone thought he was on and that he was on a few songs that we didn't know or think he was on, and he even sang in the background, but it doesn't sound like him.   When asking if his LP was finished yet he said almost and patted a package under his arm which contained all the 45's to put the LP together.  George also said the LP was a three-record set, not two.  Pat and I are positively dying to hear it, aren't we Pat?  One of his new songs is about the "Apple Scruffs" who George seems to like.  The Apple Scruffs are six Beatle fans over here and that's about all I really know about them.  I've heard rumors about them and seen them, but I really know very little about them.  I do know they publish a magazine which George likes and John's been trying to get a copy of.  Every time John arrives he looks at all of us and says, "So where's the Apple Scruff Magazine you've been promising me?" 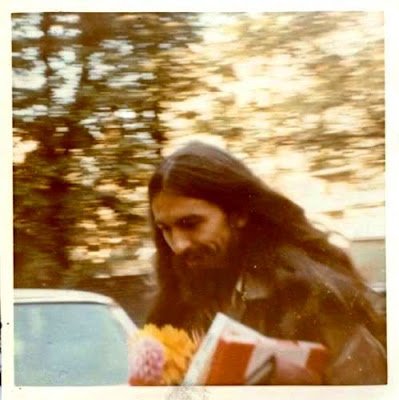 George was really super on October 9.  There I was with Sarah (from Indianapolis), Sher (from Brooklyn) and Anne (from Birkenhead) all with our trusty cameras.  John arrived at about 2:30.  Both he and Yoko were beaming smiles from ear to ear.  It was a gorgeous sight.  A little while later John sent Mal out with a plate of cake for us.  I got the "J" off of John's birthday cake!  Well, there we were stuffing our faces when Ringo drives in.  Talk about getting cake all over your camera!  It took me a week to get it off.  Ringo was his usual sweet self.  About 3:30 boxes of stuff and a beautiful bunch of flowers (we guessed for John) I got a lovely photo of George just as he cracked a smile.

It was really super, all three of them in there together celebrating John's ancient age of 30.  I couldn't help think what Paul was, and is, missing.  Makes you want to cry to think about it. I hope he comes back sometime.

The three Beatles don't htink too much of Paul anymore.  One girl gave John and LP to which he replied, "I hope it isn't McCartney!"

I'm going to end this by saying I hope Maureen has a girl this time.