This article was called "The High Society:  exclusive L.A. report"  and was written by Lisa (no last name given) for The Mess newsletter for the January 1975 issue.    L.A. was a hot spot for the former Beatles in the mid-1970s.  No wonder they needed a reporter to report back! 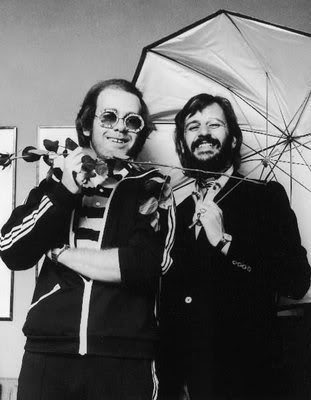 October 15, 1974:  Ringo (he liked being called Rich) records "Goodnight Vienna" with the help of Klaus Voorman, Jim Keltner, Jesse Davis and 1/2 hour later Elton John.   Klaus was nice to us and Elton wasn't too bad either.  He was driven in his $40,000 gold limousine Lincoln Continental chauffeured and all -- silver English tea tray with T.V. and record layer in the back seat.  I gave Rich a glass mug I made this spring and it was funny to hear him say in his Liverpudlian accent, "Oh wow, far out!"  He looked good wearing a Guatemalan shirt, shades (of course), his hair slick back, not quite like from the movie, "That'll be the Day."  Mal Evans kept giving me occasional D.O.M. looks every time he came out to the car.  Pretty friendly that night.

3 hours later:  Elton John left. Keith Moon walked down the street.  He was wearing a black velvet suit adorned with rhinestones, a very spacey person.  Everyone was leaving.  Rich came out with two young chicks.  He gave me a strange look though -- couldn't figure it out.  We spoke to Rich's bodyguard, Hilary.  He was telling us about garbage.  Everyone went off to have dinner at the Rainbow on the Strip.  Goodnight Rich.


October 25, 1974:  A visit with George.  he apparently was rehearsing for the concert tour.  About 3:30a.m. I was in the parking lot behind the studios sitting down and I heard a voice.  Sure enough, it was George, drinking down a fifth of booze talking to his sweetie, Kathy.  I tried not to crack up.  So I started walking around to the front when he stopped in the driveway by these girls and we came over to give him a gift.  My friend asked him if she could take a picture of him. He didn't mind.  I was surprised to hear that.  Unfortunately, the flash on her camera didn't go off.

The other nights we were there, Jim Keltner, Robbie Robertson, Bob Dylan, Shankar, Preston, a couple more odds and ends came by at the studio.  They had a beautiful dark horse out front facing George's Mercedes.  Another night we waited until 3:30 a.m. and I handed him a glass vase I made.  Then he was given a Harrison badge by my friend.  We found out later, he was wearing it at the concert in L.A.

The next night it was the last evening at the studio, all the vans were packing up to go to Vancouver.  We waited until 5:30, he didn't stop that time.  It was the same night we went to the premiere of "That'll be the Day." 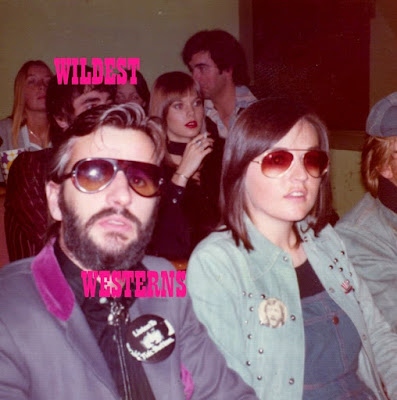 Rich looked good.  He was wearing a little gold earring.  His hair was slick city.  We left early to follow him, but couldn't catch up with him though.  He's still living here in Beverly Hills somewhere.  At one point, all four of them were in L.A. last month.  this guy called for McCartney's room and Linda answered.  According to him, she was drunk off her ass.  She kept asking him if he had friends who knew who Linda McCartney was.  Funny.  I wish I could have been there to tape her voice.  It's nice to hear them drink occasionally. 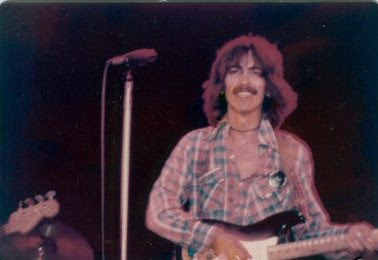 November 12, 1974:  Harrison concert.  Sly Stone was sitting behind me.  Dylan was walking back and forth to the side stage.  Shankar was fantastic!  George looked really good.  The second concert was better.  They wore hats and costumes and whatever.  Unfortunately, George's voice was croaking.  He was sick up in San Francisco.  He gave the Cow Palace audience a bad time.  "If you don't like the Indian music, you can leave," etc.