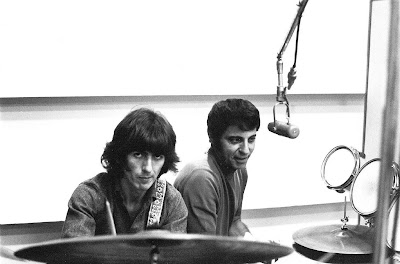 Hal Blaine was one of the most famous sideline drummers in rock n roll.   He played his drums on the Beach Boy's "Pet Sounds" album, as well as for Simon & Garfunkel, The Carpenters, the 5th Dimension, and even Barbra Streisand.    He was the drummer you heard on many #1 hit songs in the 60's and 70's.


His Beatles connection is that he is one of the only people to have played with all four Beatles at one point  (well sort of).    He played with George during some of the Jackie Lomax sessions,  played with John during the recording of the Rock n Roll album,  did overdubs on some of Paul's songs,  and played on a few of Ringo's solo songs (although I can't quickly find which of Paul's or Ringo's songs he played on).

From an interview with Hal in 1989


I'll tell ya, I had a very nice rapport with John Lennon. When I net him the opening night, I was in there early, just tuning and adjusting, and it turned out that he was a big fan of mine, obviously from all those years of listening to American records. And it was maybe a week later that my son and I were going into a drugstore, and John and his son were there. We had a nice afternoon chat, the four of us, which was really nice. But on the sessions, unfortunately, they were trying to keep the bottle away from him. He had, I don't know what you call that size, If it was two gallons size or what it was, sitting right next to him, a big giant bottle of vodka. It was a huge bottle. 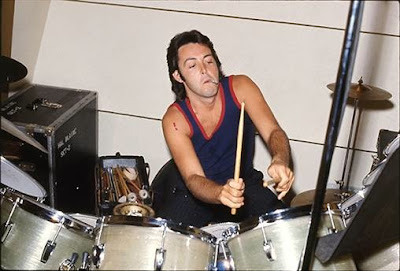 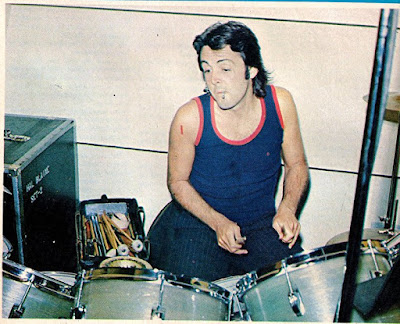 Hal was working on a Neil Diamond album and Paul McCartney was in the same studio.  Paul sneaked over to Hal's famous gigantic drumkit, known as the "monster kit" to try it out when Hal was out.  You can even see Hal's name on the case near Paul. 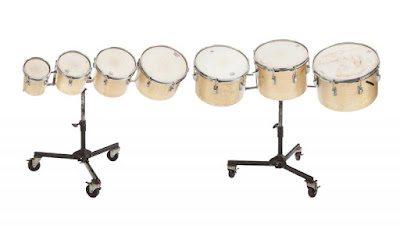 After seeing Hal's drum kit in 1968 while in L.A., George decided that a set similar to Hal's would be the perfect gift for his drummer pal, Ringo.   So George paid Hal to put together the kit that you see above.   After he received it, Ringo sent Hal a note that said, "Thanks Hal, for the tom tom tom tom tom toms!”
Posted by Sara S. at 9:45 PM