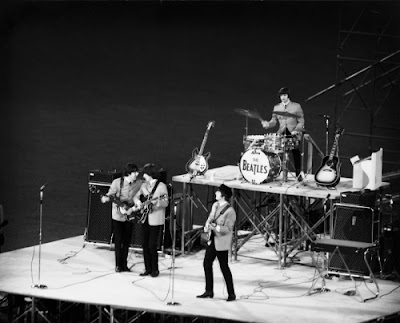 This week's review is for one of the cutest books I have read in a long time.  I have been anxious to read this book since I first talked to the author several years ago.   Fab 4 Mania by Carol Tyler is the taken from memory and the diary of Carol and tells her story of being a Beatlemaniac in 1965 and chronicles Carol's summer in northern Illinois waiting to see The Beatles in concert.

The most exciting part of the book is at the very end, which was taken directly from her diary and tells details about the Beatles evening performance at White Sox Park in 1965.    There are a lot of little details that I had not read anywhere else about this performance.   Most newspapers only reported on the afternoon show and the people that I personally know that saw the Beatles in Chicago in 1965 also were at the afternoon show.   This was really the only first-person account of what happened at the evening show that I am aware of.


The entire book, however, tells a very cute story of an almost 9th-grade Catholic girl who loves the Beatles and starts to grow up some during the summer of 1965.    You meet her family, friends and a mysterious girl that leaves suddenly without any explanation.      Carol does a great job of putting you right there during the hot months leading up to the Beatles show.

The book is called a "graphic memoir."   I am a reading teacher, and this is the first time I have heard that term, even though books such as "Smile" and "Sisters" would also fit into that genre.    Carol's book is much like the popular young adult graphic novel series in many ways.   The illustrations (cartoons) that Carol drew are outstanding and really make the book come alive for the reader.


I would consider allowing younger Beatles fans to read this book as well as first generation fans.   I think young people that read at a middle school level would appreciate the story and illustrations   The first generation fans will be able to relate to Carol in many different ways.   And those of us who wish we were alive in 1965 have a chance to travel back to those days through her book.    This is one that I recommend for sure!