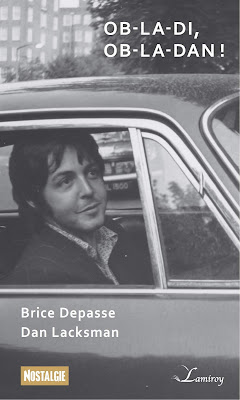 Ob-la-di, Ob-la-Dan!  is the story of 18-year-old Dan Lacksman who in 1968 left his home in Belgium and traveled to London with one goal in mind:  to meet the Beatles!

Once he arrives in London, he overhears a girl talking about how she had just seen The Beatles outside of EMI.   He starts talking to her to get the scoop and then is standing outside Cavendish and EMI himself.   The Beatles were in the middle of making the White Album and so they were coming and going and lucky Dan got to meet and photograph each Beatle.

At some point, he traveled to Kinfauns and met George and Pattie at their home and photograph them there as well.


The book is full of photos that Dan took of the Beatles, many have never been seen before.  Unfortunately, Dan did not include the exact dates of any of the photos.

The book itself is written in French.   If you are someone that can read French, then this isn't an issue for you.  But for me, who only has basic French knowledge, I was unable to read the book.   I gathered the main parts of the story from the little that was in English and the few words I knew, but I am sure there are some good stories in there.  Maybe someday someone will translate the book.    However, this small book is worth the price just for the candid photos that you won't find anywhere else.