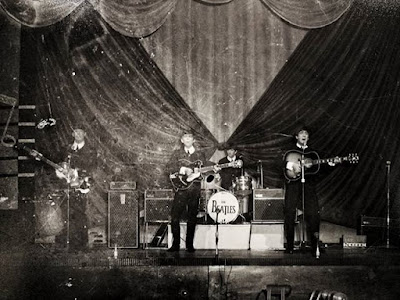 This photograph of the Beatles playing at Yarmouth on July 30, 1963, has recently surfaced.   It is the first photo of the guys performing on this date that I am aware of (I do have some photos of them signing autographs for fans before the concert)


According to the story, the guy that took the photo had the negative laying around in a drawer for 55 years and didn't ever bother to develop it or talk about it.    Recently his son (or grandson I forget) was taking a photography class and the guy was like, "Oh here is a negative from 1963 that you might be interested in developing...."        This photo has been just laying around for literally decades.

I am sure many of you are like me and every time a story similar to this one comes out you wonder, "How many other people out there have never seen Beatles photos just laying around in drawers?"   I wonder how many photos of the Beatles that we have never seen are just laying in photo albums that are stashed in closets.

I hope that as time goes by, we keep seeing little treasures such as the above photo.    I also hope someone that is good at cleaning up photos will work on this one so that we can see Paul a little clearer.
Posted by Sara S. at 9:59 PM

Email ThisBlogThis!Share to TwitterShare to FacebookShare to Pinterest
Labels: 1963, Beatles concert, The Beatles