I found this story and photos in the November 1969 issue of Datebook magazine, and while it isn't directly Beatle related, I thought it was interesting because I had never read about it before. 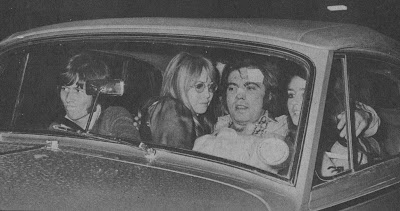 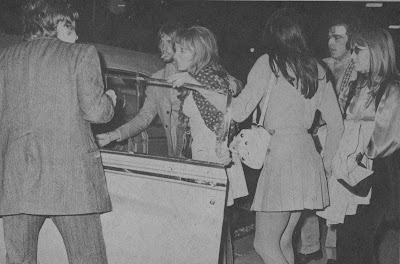 It started out as a pleasant social evening.  Lulu and her husband, Maurice Gibb of the BeeGees, still reveling in their roles as newlyweds in the home in Kinnerton Street, Kensington, had invited another young couple to come over and spend the evening -- John Lennon's ex-wife, Cynthia (a long time pal of Lulu's) and her Italian boyfriend, Roberto Bassianini.

After dinner, the four decided to go out on the town for a bit of nightlife.  They all piled into Maurice's Rolls Royce.

The area where they live is dark and secluded, and perhaps it was more foggy than usual that night.   At any rate, Maurice, who was driving, didn't see the oncoming car until it was too late.

A screech of brakes, the girls' screams, a crash of crumpling metal and broke glass...then silence.

In the backseat, Lulu and Cynthia revived first and saw, to their horror, that Maurice had been thrown right through the windshield, and Roberto's face was covered with blood.  But Lulu and Cynthia kept their cool, helping and supporting their men while bystanders called for help, although badly shaken up themselves.

Hospital check-ups revealed that none of their injuries were serious.  For which they can thank Maurice's being a rock star.  If he hadn't been able to afford that Rolls Royce and had been driving a lighter car, they might have been killed!
Posted by Sara S. at 5:47 PM