Places I remember...In my life

This story was written by "Becki" for the November-December 1969 issue of 'Beatles Rule!" fan club newsletter.


There are at least six Cavendish Avenues, roads, streets, and squares in London.  and I've been to them all.  I finally went up to a lovely meter maid and said, "Where can I find Paul McCartney, please?"  Well, not in so many words.   Anyway, I'm off.  I took a taxi to St. John's Wood, using my own map to help the cabby find Number 7.   Paul must have been expecting me because the gates of McCartney's was standing open.   (Actually, there were workmen there trying to refinish his wall posts.  they were usually covered with cute little obscenities about Paul and Linda).

I sat down on the curb and decided to sit there until the end of time if I had to.  The two workmen were very nice.  I even offered to help them scrub the wall, and I got a brush and went to work.  Then, a taxi drove up and stopped in front of the house.  I looked inside and recognized Mike.  "You're Mike McGear!" (he must have been excited by me yelling in his ear).  "Yes, that's right," he said.  "You're Paul's brother!"   "Yes."  "Can I take your pictures?!?!"  "Yes, but you better hurry.  I've got to get out before Linda gets back."     I finally got his picture then he went in and left the front door open.  One of the workmen said it would be a miracle if the picture turned out the way I was shaking.  I was still a little nervous when the big dumb-dumb Martha sticks her nose out the door and decides to investigate me.  I was standing outside the gate and she came straight to me.  The Rosie (Paul's latest housekeeper) came out screaming, 'Martha!  Martha!"  The workmen brought her back.  A few minutes later Mike came out and was headed towards EMI.  I took another picture of him as he said "Goodbye luv." 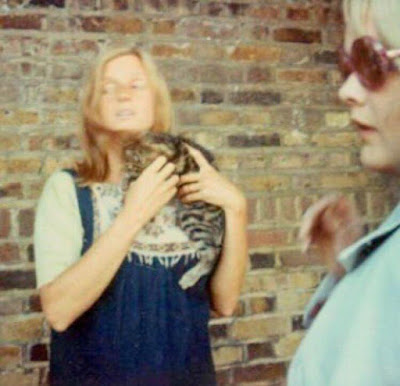 I waited another half hour, then a blue mini drove up.   Peter Brown got out and helped Linda out of the back seat.  Then Peter left and Linda came walking up screaming, "Either go down to EMI or Apple and don't hang around the house anymore!!!"  I was standing there with my mouth open.  "Can I take your picture?"  "No!  Blah blah blah blah" (all the way to the house).  But I took one anyway.  The young workman remarked, "What a crab."  Anyway, he was beginning to put the first coat of cement on the posts.  He told me to engrave my name into the wet cement and my name would remain forever on Paul's wall.  I got BEC, then quick, Linda was coming out screaming at a poor guy who had brought the laundry in.  so, I told her straight, I'd come all the way from the States just to see Paul and her and that ain't easy when you are 16 years old and poor.   I just wanted to give Paul some paintings.  Linda wanted to see them and when she looked at them, she said they were great.   I had my scrapbook of their wedding and all my pics of them.  We looked at it together and every time she turned a page she'd say it was really nice and she'd like to have it.   She was holding one of the kittens and I was petting it.  We talked about the situation with all the kids.  I told her I understood how it must be hard to face some of them every day.  Anyway, she told me to go to EMI every day if I wanted to see Paul because they were recording there.  I said I'd do a sketch of her and give it to her next time I saw her.  I asked her to sign my scrapbook and she was shocked.  I think I was one of the only kids to show her any kindness that summer.  She told me I should write to her too, at least try.   Then she showed me how to get to EMI from there.

I was all excited about talking with her, but everyone at EMI just shrugged and said, "Oh her."  Fern and Mar were nice to me though.   I think they understood I was just a stupid kid all engrossed with the idea of meeting Paul's wife.  I don't' know...Linda may not always be the greatest in the world, but I'll stick up for her.  I can dig her.  But to get back, I had just missed Paul and I was heartbroken.  Mar told me not to worry.  Paul would be back tomorrow.   And so he was.... 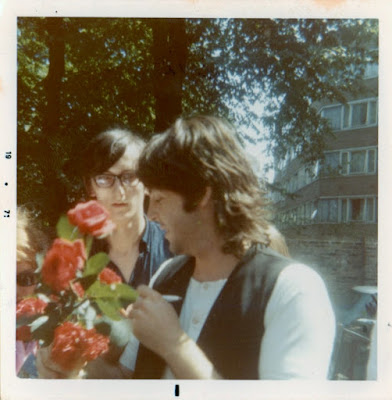 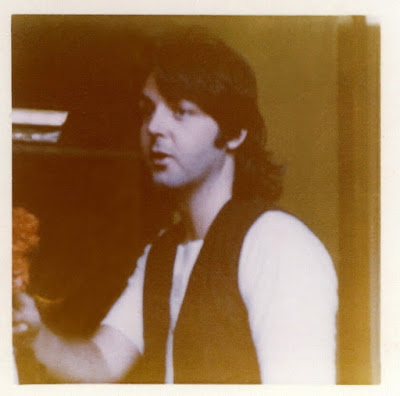 Thanks to Linda, I had found out The Beatles were recording at EMI.  So the next day (July 22), I set out to complete my dream.  I bought Paul six red carnations and I had some incense for John and Yoko.   I took a taxi to Paul's house and walked to EMI from there.  There was no one outside the gate because it was very early.  It was about 11:30 a.m.  So I walked down Abbey Road until I came to a small pub.  I went in and had some Coco-cola.  I had my camera equipment, my scrapbooks and everything else.  I was so nervous, I kept dropping things all over.  After I attempted to gulp down my Coke, I went back to EMI.  There were two boys standing outside the gates and one was inside talking to an official.  I went up to the sweetest looking on (named Alex) and told him I thought we all must be here for the same reason, to see The Beatles.  The other two boys were named Pat and Ian.  So were waited.  Fern and Mar came and I was glad to see familiar faces.  I have never been so nervous in my life.  I can't remember the exact time because I didn't look at my watch, but I saw it.  The green mini was about half a block away!!  I saw Paul and Mike.  It was like one big mass of people running inside the gates just to get a glimpse of Paul.  Paul got out of the car and I ran up to him just as he got out.  I was so nervous.  It's like experience a moving shock if that makes any sense.  I thrust the flowers and incense into his chest.  He looked at me with his "Hey Jude" eyes for what seemed a century (actual time was a few seconds) and said, "Thank you."  Well, Christ you know it ain't easy!  I slowly melted into the ground as if he had just told me he loved me.  Before I knew it, he was walking away.  So me, like a dummy, thought 'you better get a picture.  This is your only chance."So I took one and got three-fourths of his back.  I followed, walking next to him all the way up to the top of the steps and down the hallway after him.  But Fat Malcolm Evans (and I use that term lightly), grabbed me.  So I stood there desperately pushing, beating and tearing to pieces Good Ol' Mal.   All this time Paul was walking down the hall, very nonchalantly reading and clutching my carnations.  He came to the middle of the hallway, stopped, made a quick pivot around and came back!  Here I am standing there and Paul McCartney is walking straight towards me.  I stopped struggling with Mal but he kept a good grip on me.  Paul was standing in front of us talking to Mal. I was so turned on I don't even know what they were talking about.  I glared at him with loving eyes and while he was talking he'd glance at me every so often.  He was so beautiful.  I couldn't say a word the whole time.  I found enough strength to lift my arm for another picture.  Before he left, he held the flowers up in the air to show me he still had them, turned around and was gone.  Big Mal helped me down the steps and when I got to Alex I practically tore him to pieces in all my ecstasy.  Paul Mccartney:  I wish you love. I hope someday you will forgive us for just being fans.  You are what you eat.