Hari's on Tour and it is great!

Here is a fan concert review of George Harrison's concert in 1974.  It was from the Year 2 Number 9 issue of "The Mess" and was written by Laura DiPalma. 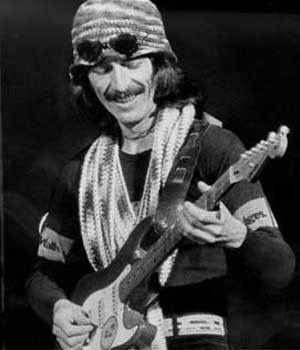 Hari's on Tour and it was great!
By Laura DiPalma

I first saw George Harrison at his Chicago concert, on the 30th of November 1974.  I had seen his plane the day before but missed him.  It was quite nice seeing George actually.  We were lucky enough to have first row seats and he looked at us a lot.

When my friends and I arrived at the Chicago Stadium, we anxiously awaited first, getting into the hall, then having George come on stage.  I was so thrilled to be actually seeing him, after waiting and hoping for so long and in the first row too!

Monty Python's Lumberjack Song came over the loudspeakers and the hall went dark and everything was absolutely still.  I couldn't bear it any longer and I just screamed out "George!!!"  Two minutes later, at 2:20pm (Central Time), he came out on stage.  I died!

He launched into "Hari's on Tour" and at this moment some very annoying people decided to pass in front of me.  This was quite difficult, as they couldn't get passed my photographic apparatus, so I had to stand up and let them climb over my seat.  It was then, whilst being crushed again the barrier board in front of the stage, that George chose to look at me, who stood there looking like a helpless idiot.  I practically was frozen by his eyes.  They were so beautiful!

During the show he would look over at me, sitting there with a decidedly silly smile on my face.  My friend Ceil and I said that we must have looked like loonies because George made some mention of a bunch of loonies up in front.

Before the intermission, George put in a plus for us all to buy programs, so I grabbed mine and waved it like a maniac and he grinned at me.  I tell you it was such a good feeling.

The second Chicago concert was just as good as the first one.  Geroge must have recognized us, in the first row again, as he kept grinning at us and even smiled for my movies and photos quite a bit.

After the second show, I had to fight a roadie for Geroge's guitar string, which I got and treasure it.  I was also interviewed by another roadie who came over to ask me some questions and my friends all joined in.  I said some very silly things and then found out that these interviews were supposed to go to George (arggh!)  I managed to convince the guy to turn the machine on again and we all told George how much we loved him and we'd be seeing him again.  It was fun.  I even managed to get a Dark Horse button from another roadie. 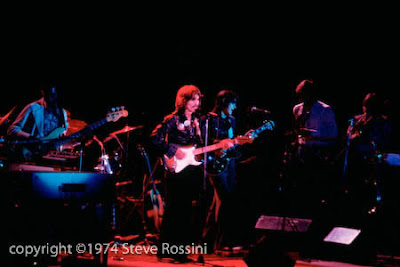 I went back home the next day and waited for is Long Island concerts to come up.  I got all of my film developed in the meantime and they came out beautifully.  Well, we weren't as lucky in New York as far as the seats went, but we did manage to get into the orchestra for the first show, with 25th row which is pretty good for the Nassau Coliseum.  George spotted us on our seats dancing and laughing at us a bit.  During the intermission, we saw George's Dad and Olivia Arias.  We couldn't get over to talk to them as a guard blocked or way but Olivia gave us a smile.   the second show was great and we walked all around the auditorium.  I was really annoyed at all the people who left the hall during the Indian segments.  Ravi wasn't with the show here, as he had taken ill following the Chicago concerts. 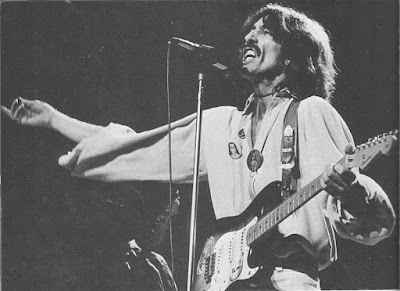 The New York City concerts at Madison Square Garden were next on my agenda.  At the Thursday night show, I noticed that George's voice had improved a lot.   He was very happy and Ravi was back on the tour.  During the Indian segments, Geroge would sit off to the side of the stage, deeply into the music.   The Friday afternoon show as fantastic.  George really put a lot into the little kick-dance thingy that he and Bill Preston did.  I got some great pictures of that in Chicago. 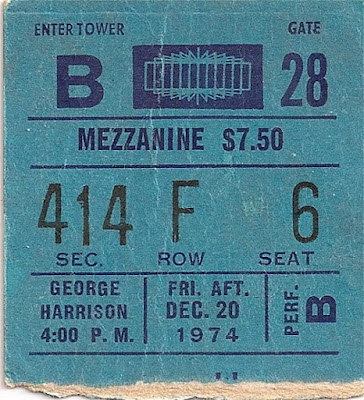 The last show on Friday night was also the last show on the tour.  I cried nearly all through the show.  We were in the orchestra again but this time in the second section. I did manage to get to the barrier though when the house lights were turned up, people started climbing onto them trying to get a better view. I started waving at George and he squinted at me across the distance, then he smiled and waved back.  He ended the show with "See you in another eight years!"  I hope not George.

Many of you know the line-up of songs so I shan't go into that, but I will say that he performed all the songs beautifully.  Remember he doesn't sing from his throat, he sings from his heart.  And to all those critics who panned him, well, they didn't pay for their tickets, they didn't even want to be there so if they can't understand the feelings, what right do they have to criticize?  Forget those critics, all of you who loved George's concerts, and just remember the feeling that it gave you.

An added note:  While George was in New York, we managed to get up to his floor in the Plaza, as I found out what room he was in.  But alas, only to be escorted away by a tremendous bouncer.  We managed to meet John Lennon though, which was all quite nice and he posed for a photo for me.  We stayed by the Plaza the whole day following the show, but George managed to get away without being seen by any of us.  But I did go home with happy memories of George and I can't wait until I see him again....sometime.  I will.