Sometimes when I'm researching Beatles fan club stuff,   I stumble upon something to share with you all.   This article's author is not listed, but it was published in the July 1970 issue of the Harrison Herald.

Geroge arrived in New York City on April 27th (1970) accompanied by Derek Taylor.   George, Pattie, John, and Yoko had finally received their U.S. visas.  Pattie did not accompany George to New York because she was in Los Angeles.  She has been commissioned by a London art dealer to buy some of the things being auctioned at the MGM film studios   George was in New York mainly for business purposes.    When he arrived, he was lonely so Pete Bennett (George's director of activities) arranged for him to spend some time with the Hall family.    Mrs. Hall is a reporter for a local newspaper in Yonkers.  He was interviewed and Mrs. Hall had the article printed in the paper.  Also during his New York stay, George went on a shopping spree.  He bought shirts and a white denim outfit at Kauffman's on E. 24th Street, and a pair of work shoes at Hudson's on Third Avenue.  He rented an electric guitar at Manny's Music Store.  He looked at tractors at Mount Vernon.  He did an interview for the ABC-FM radio network and almost went to see "Oh Calcutta!" but he was too tired from his shopping spree. 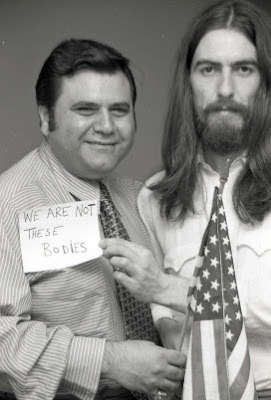 On May 1st he went to the fan club office to see Sandi, Rusty and anyone else who happened to be there.  Sandi said she was at her desk working and when she looked up, George was just standing there in the doorway in his faded denims, barefoot with his shoes in his hands.   He came in her office, sat down and just started to talk.   Before leaving the office, he took with him some "Govinda" posters which he flipped over, some Yellow Submarine books and Fan Club booklets.

Later Sandi and Rusty accompanied him to the hotel Pickwick where he was staying.  Rusty proceeded to take about 70 photos of him.  He serenaded them with the guitar he had rented playing stuff from "Abbey Road" and things he made up on the spur of the moment.  He played some records and Sandi interviewed him for "Datebook."  He changed his shirt and put his hair in a ponytail apparently for Rusty's benefit since she was taking photos.  Sandi asked why he wouldn't smile for pictures and he said, "You don't have to smile outwardly to be smiling inwardly.  I'm always smiling."  He said he's sure the Beatles break-up in only temporary while they do their own albums.  (He started doing his on May 20th with the assistance of Badfinger and Ringo.  Phil Spector is producing the album).  Apparently, after his visit with Sandi and Rusty, George went to the studio where Bob Dylan was recording.  During the 12 hours, he was there, he and Dylan cut an entire LP together which is supposed to be fantastic with both Beatle and Dylan songs on it.  He also was in N.Y. to find out why his Radha Krishna Temple and Doris Troy records were selling in America.  He accomplished a lot during the short time he was here.  He went back home on May 4th.
Posted by Sara S. at 10:43 PM