This report comes from the "FLMC newsletter" September 1968 edition.   I really don't agree with all of the opinions of the writers, but it is an interesting piece to see what the mindset of what fans were during this time in The Beatles career.   This was written by Mar Y. and Fern B. 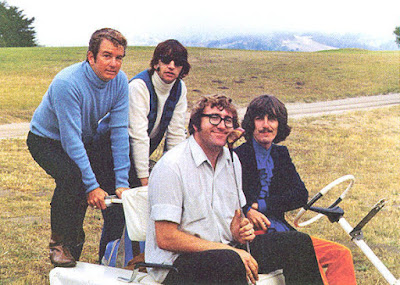 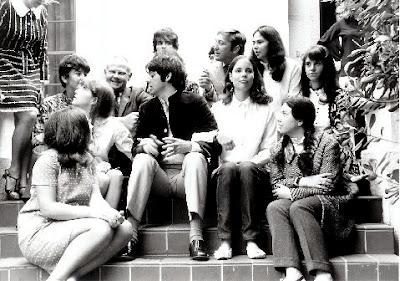 I want to start this report by confirming the following rumor.  Yes, it's true that John Lennon flew to L.A. to announce his engagement to our roving reporter, Fern.  Now let's get down to business.

As all of you know, John and Cyn are getting a divorce and most everyone is still blaming John.  Well, let it be known that a man that's truly happy and satisfied at home doesn't have to go out looking.   Kind of puts the shoe on the other foot, huh?  We feel that both John and Cyn are to blame, but both deserve happiness.  Let's hope they can find it now.

How's this for timing:  Ringo and Maureen dined at one of Beverly Hills best-known restaurants -- The Luau, a restaurant we pass quite a few times a week and talk about going into, but never do.  Also while in town, Ringo and George visited The Factor -  George on Wednesday and Ringo on Friday.  Both were minus wives.  They also went to the Whiskey -a Go-Go.  Rumor has it that Ringo went to a Tiny Tim concert in Santa Monica (where we live), but the rumor has yet to be confirmed.

I'm not going to mention that I heard that John and Yoko's latest film shows them making love and also a five-minute kiss.

The two of us and Lucille were lucky enough to meet and talk to that beautiful green-eyed sexy hunk of a man -- The Paul McCartney M.B.E. at the Beverly Hills Hotel bungalow.  He was like everyone says.  He is charming, witty and very understanding.  Paul was leaving for a boat cruise up and down the California coast.  and for those who are interested, Paul is the proud owner of a very hairy belly button!

We hear from Cindi that John has an apartment near Hyde Park.  We wonder how long before fans find out where it is?

Ringo has joined his fellow Beatles and finally signed on as a composer for Apple Corps Ltd. can't wait to hear his first song.

Magical Mystery Tour showed in New York on August 11.  We wonder how it went off.  When it was shown here, the turn out was fantastic and the response was even better.  (Your mother should know received five standing ovations!)

John Lennon has sexy teeth.  He also claims to be the world's worst speller.

For all you with curious minds:  Yoko has been married twice before and has a four-year-old daughter.  She claims to have given birth to a grapefruit when she was a teenager and gets kicks out of hurling paint at her critics and ripping her clothes off when she's mad ...usually in public.  Ho Hum.

Well, John and Ringo are getting impatient so this 007 and 007 1/2 singing off for now.  Happy Birthday to our good friend Cindi.  Cheerio -- till next time!