So thanks for the Memories

Tonight's fan memory came from the fanzine, "The Mess" the November 1974 issue and was written by Becky (no last name is given).  The writing style is obviously different, but I think it is fun to see how some fans wrote at the time (trying to be Lennon-like maybe?) 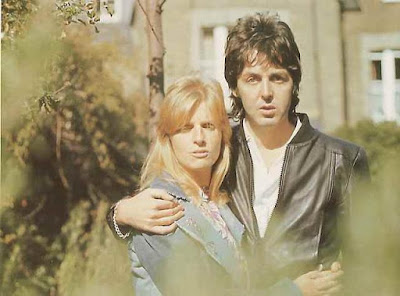 Jean and I arrived in London on a typical soggy night.  With no money in our pockets and no food in our bellies, we found our way to Maida Vale.  Much to our horror, our flat was still being occupied by some weirdos, so we spent the night in a hold in the ground and fed 5 pence to a box for heat (every 45 minutes to an hour).  Luckily a box of McDonaldland Cookies kept us from starving.

The next day.
Let's all get up and dance to a song that was a hit before your mother was born.  What a way to start off a day.  A KNOCK KNOCK on the front door to our hole and who could it be?   None other than the head of St. John's Wood Retreat.  Greetings all around a report from the front.  It seems a blue mini was spotted in the vicinity of Cavendish Avenue with two, very suspicious looking characters occupying it.  Further investigation showed that one of the two is known to be President of McCartney Ltd, a small colony of followers off the face of this earth.  Very interesting.

Meanwhile, Jean and I were left holding the baggage while the group set out on its daily dozen.   After dethroning the previous occupants of our flat, we unpacked a bit and made our way to a bank for some lunch.

And then and then, what a trip to London would be complete without a stroll down Abbey Road (and vicinity).  Jean and I admired the scenery in St. Johns Wood, so lovely.  We happened to come across an absolutely marvelous little house, in a very posh neighborhood (so they way), it was inconspicuously painted all the colors of the rainbow.  Very nice.  We learned from a passerby that the owner of the mansion is a bit eccentric.  They say he has a habit of driving Nova Scotch till all hours of the morning and he is frequently seen terrorizing the neighborhood on a Honda motorbike. But, I learned from someone very close to myself, that his wife and children are perfectly charming.

Well, I must say, it was a bit of a surprise to us both when we came to the end of the rainbow and found the group in full pursuit.   Our hellos were combated with goodbyes and Jean, and I found we could not withstand the determination of their forces.  We were asked (?) to wait at the corner while they sought the pot of gold.

The gold arrived in a chauffeur-driven car, and I caught a glimpse of its brilliance from across the road.   Later, we had soup with glasses, and I began to see things in a different light.

End of part one.
Part Two.

Things and people and places did not always prove to be as negative as day one.  I recall the day I first spoke to Linda again after one year had elapsed since our last meeting.  I was with my friend Alex.  We had first met in the summer of '69, also the year I first met Paul and Linda.  Alex and I decided to go back to Abbey Road and Cavendish Avenue for sentimental reasons.

We first went to Cavendish.   I had a birthday card for Linda that I was going to slip into the mail slot.  And I did.  We decided to sit on the wall across the street from the mansion and reminisce.

No sooner had we sat down, and the green Rolls comes zooming towards us.   Paul stopped the Roll right in front of us and let Linda out.  I was feeling a little shy and embarrassed about being caught sitting right in front of his house, so I never really got to see Paul when he gave Alex and me a wink.  But Alex did, and he waved back.   I looked up to see Paul driving away leaving Linda at home.   She waved, and we waved back. Then I called to her and asked her if she remembered me. When I came across the street to her, she said, "Oh, Becky, I didn't recognize you.  how are you?"   I was feeling great.  My hair was a year longer and frizzed besides, and Linda noted that I had "gone Hippie."  We had a chance to chat for five minutes or so, I guess.  I won't go into all of it, but she extended an invitation to me to come back anytime, and I can't help feeling good about it.

That same night:
After Alex and I had left Linda, we walked to Abbey Road and found the green Rolls parked in the EMI parking space much to our excitement.

I immediately called Jean, who was back at the flat soaking her feet and told her to hustle down to EMI.

It was about a 1/4 to nine when Paul and Linda came out of the studios.  We sat quietly across the street.  Paul stopped before he pulled out into the traffic and spotted us, turned his bright lights directly on us.  I was blinded for a moment.  Then the Rolls came by with Paul honking the horn and both of them waving goodnight. 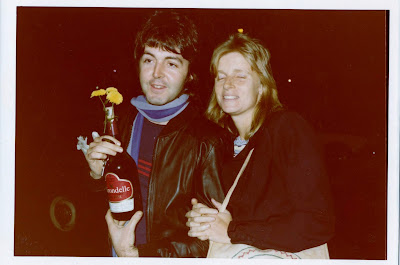 There was one other time we saw Paul and Linda together.  Once again it was at EMI.  They were doing some mixing in the studio.  It could have been Junior's Farm.  It was raining and raining and cold.  I was feeling excited and crazy, so I ran down to the corner pub and bought them a bottle of wine.  Swiped three marigolds from a florists window box and ran back to EMI.

In the meantime, I drank a bit of the wine while we waited.  We didn't have to wait long, and we were rewarded with a spontaneous photothon and a little bit of conversation besides.  Then it was a good-night and good-bye.  The last time I saw Paul.
Posted by Sara S. at 9:23 PM