I'll See you on cloud Nine

This story comes from the Harrison Alliance fanzine January-March 1992 issue.  It was written by Hiroko Taguchi and translated by Naomichi Hirao. 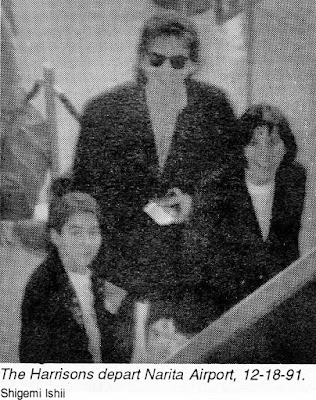 I'll See you on Cloud Nine
By Hiroko Taguchi

It was 3:47 PM on November 28, 1991, when George's plane arrived at Narita airport.  His plane was seven minutes later than the estimated time of arrival.  It was raining outside.  I was at the airport and said to myself that I must try to remain calm while waiting for George to appear at the arrival gate.

After a little while, there was George!  There was a halo around his head -- I'm not exaggerating.  I really felt like that.  I couldn't stand still; I panicked and burst into tears.  After that, I went to the Capitol Tokyu Hotel where he was staying, but I couldn't meet him that day.  I went back home, but I don't know if I slept or not.

I don't know how many hours it took.  I was shown the door again and again.  Actually, I was almost about to give up, but my friends encouraged me a great deal.   George still didn't turn up.  But suddenly my friends saw George and started running to him.   Other fans also were gathered around him, but I couldn't get close to him.  My legs didn't move!   The halo prevented me from going to him.  Another reason was that I didn't want to behave foolishly and give him a bad impression.   I felt dizzy.  Looking at my friends shaking hands with him, I did my best to get closer to him.  George looked in my eyes and smiled at me with his characteristic crooked grin, and shook my hand tightly.   And then he went away by taxi.

I cried and cried.  There was a middle-aged woman crying beside me.  She had been a fan of George's from the 60's.  It must have looked unusual to people who had no interest in Geroge.  But to me, it was the day my dream came true.  I had to wait for this for 18 years!

I decided to keep on waiting for him.  I wanted to see him again even though my last train had gone.  After 40 minutes, I noticed George was in the lobby.  And luckily enough, most of the fans had gone and there were only 5 left.  His bodyguards told us "no autographs!", but he picked up the pens handed to him by fans and gave everyone autographs.  He shook my hand again and looked into my eyes -- I almost passed out!

I thought how glad I was to have been a fan of George for years.  Then I went home.  I got on the subway and when I switched my Walkman on to listen to George's songs, I burst into tears again.  I cried until I reached my stop.  Strangers looked at me with suspicious eyes, but I didn't mind at all.  I was the happiest person in the world.  November 29, 1991 --- I'll never forget that day.
Posted by Sara S. at 6:54 PM