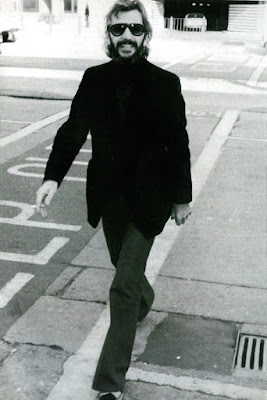 This story is from some named  Rainer Adams who met Ringo.   He is from German and what I am sharing is translated from German and was published in the fan magazine The Beatles New Book from the April/May 1975 issue.    The English translation isn't great, but you will get the idea.

Between 28th of December 1974 and 3rd of January, I was in London.   The fifth time and it was great.  At first, my friend Charly and I went to the Lyric Theatre to see the musical "John, Paul, George, Ringo and Bert."   It was a nice play, but not all of the parts of the piece were tasteful (Hitler took a role in it).  I think it would be successful in Germany, too.

Then we went to St. John's Wood, Cavendish Avenue (London N.W.5) to see Paul, like I did on my last trip in March 1974.  He wasn't there.   On the last day of the old year, I took a train to Ascot.  I was hoping to see Ringo, although many newspapers said that the ex-Beatles were all in America.  They were wrong.  Ascot is a beautiful place, well-known for its horse racing.  I asked the taxi driver to bring me to Tittenhurst Park and he did.

Ringo was there (surprise, surprise). He lives in the house where John lived (the entrance is shown on the cover of "Hey Jude.).   My present was a bottle of wine and he gave me some autographs and a rare photo of him with autographs.  A special present of him was sunglasses with stars on the glasses and a button of "Goodnight Vienna."   I had great luck on this day.

On the last day, I gave him a photo from the white double album with my address because I want to get an autograph on it.

Ringo was the third Beatles from which I get a personal autograph (after George and Paul).  Now, I hope to find John Lennon "One Day at a Time"  That's all!