Blessed are the Cheesemakers or Tripping over Legs

Tonight's fan story focuses on George and was written by Vickie Bovio.  It was published in the October 1979 issue of "With a Little Help from my Friends."  (No photo available with this story, so I posted a photo of George from October of 1979). 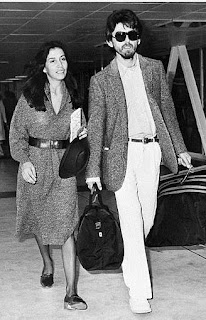 On Saturday, September 15, 1979, on an impulse, Ken (my fiance) and I decided to take a ride into NYC.  I ran up my friend Rikki and she agreed to meet us in front of the Plaza Hotel.  Ken, Punkin (my dog) and I got there about 2:00.  As the only parking spaces across the street from the Plaza seemed to be a no parking zone, Ken stayed with the car so I wouldn't get a ticket or worse yet, towed away.   The Who were staying at the Navarro Hotel, which is around the corner and two blocks up from the Plaza.  Rumors had it that Ringo was supposed to announce one or all five of the Who's concerts, so I decided to see if he was the Navarro.

I waited there for about 45 minutes, when this tall, rather good-looking fellow with shoulder-length blond hair, sporting a full beard and mustache popped out of the Navarro.  I didn't recognize him at first.  Then I heard someone say, Eric Idle!  That was it, I was holding Punkin and had my camera loaded with color slides.   I left my autograph book in the car.  As I started taking pictures of Eric, trying to do the best I could while holding my dog, he looks at me, sees Punkin and says, "Oh, is he a fan too?!"  I cracked up over that one.  As he got into the cab, I said, "Eric, bring the Pythons back on TV."  His reply was, "They can't afford it."  And off he went.

I ran down the two blocks, and as I Was rounding the corner of the Plaza, some guy was standing directly in my path, and I nearly fell over his feet.  He seemed very amused at the sight of some excited person running with a poodle and a camera, nearly falling over him.  when I saw that it was none other than George Harrison, I did a double-take, not stopping for a second!  I ran across the street to the call yelling, "Ken!  Ken! Give me the book!  Fast! Give me the book!"  I guess he was sort of expecting it, because he turned around the with a smile, said "Certainly."  This was exactly 3 pm and Rikki still had not shown up.  I handed him my autograph book, which just happened to have Paddington Bear on the cover.  George looks at Paddington and with a big grin says, "Oh!  how nice!"  I swear his face lit up when he saw it.  I bet he's got a huge stuffed Paddington for Dhani.

As he was signing my book, I said, "George, you don't know how much this means to me.  I've been waiting to meet you for the past 16 years."  I was horrified when I realized what brilliant words came out of my mouth.  Apparently, George got a big charge out of that, because he cracked up, and still laughing, said teasingly, "Well, I hope you haven't been standing in front of the Plaza for the past 16 years!"  With that, I couldn't help but laugh myself.  Still laughing, I said, "Not hardly."  He handed me my book and got into the limo.   He was wearing white sneakers with red and blue stripes, the tightest pair of jeans, his blue racing jacket and sunglasses with blue lenses.  His hair is cut short (for him that is), he was sporting a short mustache and he hadn't shaved.   He was with a tall blond woman (not Pattie).  she seemed to be about 40-45.  They took a few small pieces of luggage with them, had a couple of brown paper shopping bags, and a big box, wrapped in white and gold paper.  They were on their way to the airport and were too rushed to take any photos.  After George left, about 10 elderly people (I'd say ages 50-60) came over to me and said, "Who was that young man who gave you his autograph?"  Before I had a chance to answer, one of the doormen from the Plaza said, "Oh, that is George Harrison, but you don't' see him on TV much anymore!"  Another little old man said, "George Johansen?"  Right.  I later found out that George had come into NYC on Friday morning (14th), so I really lucked out this time.  My only ending comments on George are 1.  He seems to be so much shorter in person.   2.  He is soooo skinny!   3.  He's a living doll.  Definitely worth waiting 16 years for!
Posted by Sara S. at 8:37 PM

Email ThisBlogThis!Share to TwitterShare to FacebookShare to Pinterest
Labels: 1979, fan story, George Harrison, With a little help from my friends