Another installment of Girls that met the Beatles from Datebook 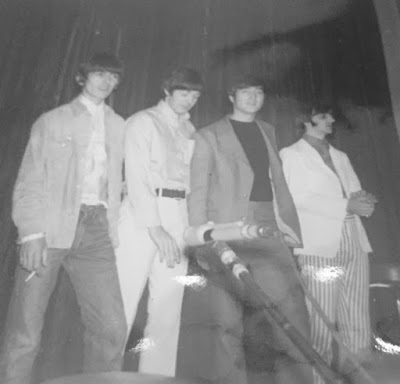 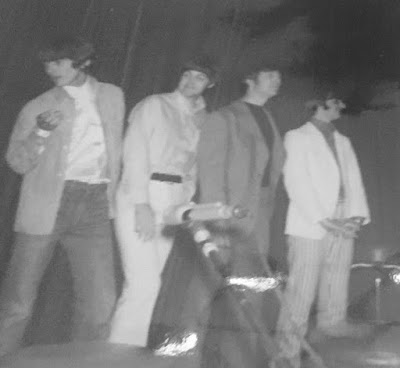 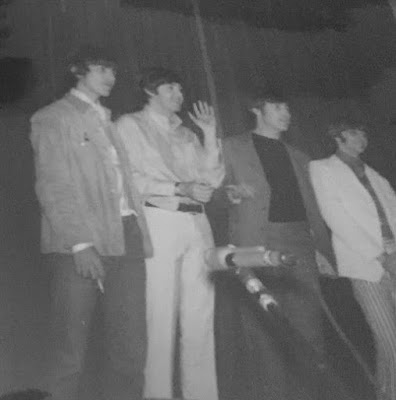 Los Angeles, California:  Even standing there among the photographers in the crowded room on the first floor of the Capitol Records building, I didn’t believe it.  I wasn’t quite sure why I was there, but it just couldn’t be for a Beatles press conference!  I didn’t even feel excited, just tense.

But there was Tony Barrow saying, “The Beatles are on their way.  We’ll have all the photographers come up along the front here for five minutes of still photos.  Then, after the questions, we’ll ask you all to leave so the television equipment can be set up.”

Surrounded by professionals with their complex cameras and equipment, I lifted my little “Flashfun” with a bulb and was ready.  I’d moved pretty close to the front of the room.  Being 5’1” often has advantages.

Suddenly there was screaming from an opened side door.  Photographers clicked frantically at whatever their huge bodies were hiding from me.  Being 5’1” doesn’t ALWAYS have advantages.  Then I saw the Beatles – casually dressed, laughing, waving and reaching for ciggies.  I touched the man in front of me.  “I’m short,”  I said against the noise.  “You can shoot right over my head.”   He smiled and helped me squeeze in front of him.  Sardinesville.    I was crushed by shoving bodies and swinging camera equipment.  I managed to snap some pictures over the shoulders.

After a bit, I found myself in front.  The boys were on a small platform with a red drape background.  I clicked, ejected and replaced the flash bulb, rolled the film, and then shot again as the boys grinned, waved, looked this way and that.  Then my twelve pictures were gone, and the photographers were being moved back to the sidelines.  When we were finally contained behind a sawhorse, I found I was still in front, crushed against a very tall photographer who plainly wished nineteen-year-old girl reporters with “flashfun” cameras had never been born (or at least released from their cages).  Sitting about three feet from me was U.N.C.L.E.  Robert Vaughn, and near the boys was Dave of the Byrds.

The Beatles were seated on their swivel stools.  John swung joyously about on his throughout the conference.  George, wearing a brown suede jacket over a white silk shirt tuck into scuzzy blue jeans sat nearest me…my beloved Paul in white Levis and a grey shirt with black pinstripes, John, in a black jersey shirt and dark-cinnamon colored suit, and Ringo in blue and white striped pants, blue print shirt and white jacket.

During the first few questions, Paul accidentally pulled the cord from his microphone.  Making his “oops” face, he tried to fix it, looking about in embarrassment.  George, the electrician finally leaned over and fixed it.

Q: An English designer has said that miniskirts aren’t popular in America because American woman have ugly legs.
Ringo:  If they don’t’ wear miniskirts, how can you tell if their legs are ugly?
George and produced a coke from somewhere and was drinking it.
Q:  A recent Time magazine article said “Day Tripper” was about a prostitute and “Norwegian Wood” was about a lesbian.  What was your intent?
Paul:  We were just trying to write songs about prostitutes and lesbians, y’know?
Q: do you have much trouble getting around?  Can you go to the movies?
Paul:  In England we can ‘cause we know England.
Ringo:  But when we’re in America, we’re on tour, everything’s advertised, and that’s why everybody knows where we are.
The others turned in mock surprise, John slapped his legs and exclaimed in one of his many voices, “Oh!  Is that why everyone knows where we are?”
Q: John, did you meet Cass of the Mamas and Papas?
John:  Yes.  She’s great.  I’ m seeing her some nights.
Q:  What is your most exciting or disappointing experience?
George:  I think Manila was the most disappointing.
Q:  I’d like to address this next question to George.
John:  Yeah, George what’s your new address?
Q:  You recently made a statement about coming to America to be beaten up…
George:  Oh, that was after Manila and someone said, “What are you going to do now?” and I said, “We’re going to rest up before we go get beaten up by the Americans.”  By beaten up, I meant…
John:  jostled
George:  Yeah, jostled.
Paul:  Anyway, we aren’t beaten up by fans.
George:  Yeah.  There’s been a lot said about fans.  All the ones we lost we really don’t mind.  If they can’t make up their minds, who needs ‘em?
Q:  About those Beatles bonfires…
John:  We missed ‘em.

One of the adult newsmen, irritated by the number of young girl reporter present, asked John if they were always so blessed by “would be” reporters.
John:  You can’t always tell the would-bes from the real ones.

It ended too soon and people started leaving as the TV equipment was readied.  Photographers were free to take more pictures.  I didn’t have any film left, but I went forward anyway.  After a moment, I found myself in front of the Fab Four and still unable to believe it.  I waited until Paul had finished speaking to a man, then I called, “Paul!”  And held out my hand, unable to say “can I shake your hand?”

He stared at me for a second and then a smile burst across his face and he was leaning down toward me.  His hand, strong and wonderful caught mine and shook it vigorously and my favorite face was looking at me as it grinned and said, “How do you do?  Glad to meecha!”  I had no answer ready and was unable to say a thing.  I hoped desperately that  I was smiling back at him but he seemed to understand.  Then he stepped back with the others.

Still feeling like an embarrassed idiot, I glanced to my left at the small table before George’s microphone.  There stood his half-empty Coke bottle.  I fought a mental battle and decided:  Yes, I was silly enough to want the bottle as a souvenir.  But I couldn’t just walk off with it.  I’d have hated for George to see me leaving with it, especially if he were still thirsty.

“George!”  I called.  He looked my way.   “Can I have your Coke?”  He shrugged and nodded, saying, “Yeah sure.”  I captured my prize and left the stuffy room feeling very happy.
I guess what impressed me the most was that they were so much nicer than I’d expected them to be.  They weren’t sarcastic or irritable, even when asked the most stupid questions.  They really seemed to be enjoying themselves.  They were friendly, polite, pleasant, bouncy, and funny, willing to follow the photographers’ zaniest suggestions.

John’s face looking learner; he seemed to be the most alert, answering most of the question quickly, often supplemented by a remark by Paul.  George was very casual and thoughtful and smoked a lot; he seemed to be the most concerned about the Manila flap.  Ringo, sweet and cuddly, smiled a lot and was rather quiet.  Paul was a clown, lively but innocent looking with his lazy eyes and lightning wit.
Their best treatment was for their fans, the girls who had managed somehow to get there, and who wanted to shake hands or get an autograph or collect a Coke bottle.  That famous Coke bottle?  Of course, I still have it.  It’ll make the most precious pop-art vase in all California.