I am still working through the April 1979 issue of With a Little Help From My Friends with a story by Denise Nichols. 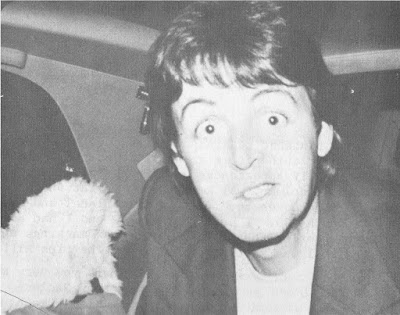 
24 November, 1978:  What was special about that day?  Maybe nothing to many people, but to me and my friend Bev, it was a day, a triumph.  A dream come true.  Meeting Paul McCartney.

We heard that he was recording there from a guy called Tony who worked there.  He was very helpful and nice.  He told us to come back around 8pm where we would see all the fans waiting for him.  Marvelous, we thought!  The time was about 2:30, so as we had nowhere else to go, we thought we'd look around the shops at St. John's Wood.  I had to buy some flashes for the camera.  Well, we tried to take our time, and have a good look around, but we were still thinking about seeing Paul, and by 4:45 we were getting impatient.  so we decided to make our way back to Abbey Road.  We arrived at the studios around 5pm just in case Paul decided to leave early (he didn't).  He made us wait right until 8pm!  That's when his Rolls arrived for him.  Not long now, we thought half frozen solid!  So we decided to move into the parking area.  Suddenly, there he was.  On the steps of EMI, and looking around at us.  Then he disappeared inside the studio again.

About a minute later he appeared again and made his way towards us.  He was carrying a "Wings Greatest" album under his arm, so I suppose that was what he must have forgotten.  Another girl who was there stopped Paul just before he reached his car and asked for an autograph.  He signed for her and then got into the Rolls.  I thought to myself, oh no!  He's going to be driven away!  But instead, he rolled down his window, saw me with my camera and asked, "Are you going to take a picture then, or don't your camera work?"  Well, I was stunned.  Very stunned.  So I just said "Yeah!" Paul must have thought "well, which question does that answer?"

Anyway, he saw me get my camera ready for the big photography session so he proceeded to pull the most handsome, lovable, beautiful face I've ever come across.  I snapped the picture and said, "Thanks, Paul."

Bev then asked Paul for his autograph and told him that she was from the States.  When I asked Paul for his autograph, he asked me whether I had a pen, which I hadn't, so he asked Bev, "Can I borrow your pen for a moment?"  Bev, who didn't quite hear what Paul said, replied, "Pardon?"  Then Paul said, "that's English for can I borrow your pen please."  Bev replied, "Hey!  don't make fun of us Americans!"

I thanked Paul for the autograph, and Paul then said that he was sorry but he had to go now, as he was late.  He said "tara" and then was driven away by his chauffeur.

Even though George is my favorite, and always will be, Paul gave me the feeling of welcome and friendliness toward him.

Email ThisBlogThis!Share to TwitterShare to FacebookShare to Pinterest
Labels: 1978, album cover, EMI, fan memory, Paul McCartney, With a little help from my friends