I just can't get enough of the stories from the fans that met or saw John Lennon in 1975 at the Helping Hand marathon.    This story comes from issue 10 year 2 of The Mess and was written by Rosemary Tully .


Every year, one of the local radio stations in Philadelphia, WFIL holds the "Helping Hands Marathon."  It raises money for 23 different charities in Philadelphia.  Several personalities usually come to help out.

This year someone from WFIL management decided to ask John Lennon to help.  He went to New York, had dinner with John and talked it over.  John agreed.

A friend of mine who works at WFIL told me about John's upcoming appearance.  I got really excited and asked if there were any way I could get in.  He said sure if I would like to help out and answer phones.  Of course, I agreed.   I also got my best friend, Cindy, in.   She nearly died when I told her!

The marathon took place on the weekend of May 16, 17 and 18.  We found out two weeks in advance.  The longest two weeks I ever spent.

The Tuesday before the marathon, I managed to sprain my ankle.  The doctor and my parents didn't want me to go to the weekend.  I refused.   We had a big argument and it turned out we both won.  I would only be allowed to go if I wore crutches.  I thought that would be the end!  Everyone would stare at me, plus I'd feel like an idiot! (They did, I did.)

Friday finally arrived and so did we.  We went into the wrong end of the radio station and with a little help from a guard, we found our way to the loading dock where the marathon took place.

We were told to fill in the tables in the back where nothing could be seen!  that is where the crutches really came in handy.  Cindy and I were allowed to sit up front, in perfect view of John and the rest of the crowd.

At 3pm, things got underway.  Phones started ringing, people started out materials (sic) and heads started spinning.  I'm not sure why, but John was late.  Word got round that he'd arrive about 4pm.  So we all kept our minds on work.

At a quarter to 4, there was a slight rumble towards the back entrance, everyone turning around and there he was, John Lennon.   He was being mobbed right and left.  Cindy got up and went to get some autographs.  And he made his way toward the front, I flagged him down and asked him to sign my shirt (a Beatles shirt, of course!)  He didn't say anything, just started signing.  I couldn't believe it!  John Lennon!  On my back!  I was truly on Cloud 9.  Then I started to take some pictures.  The girl across the table from me just kept saying, "I can't believe it." 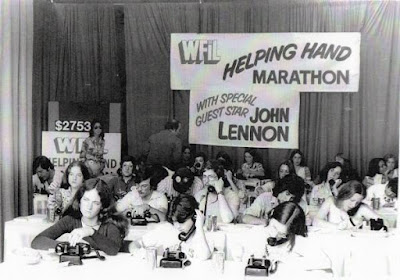 Soon John had to leave to broadcast over the radio.  He was telling everyone to send in their pledge.  We all went back to work.

Every hour, John would come down for about 15 minutes.  He posed for the T.V. cameras, talked to some people on the phone and took pledges from the crowd.  Outside he autographed everything from posters to album covers, sneakers to shirts, and books and arms.

Other celebrities like Yoko Ono Lennon, Neil Sedaka, Barry Manilow, Paul McCartney, and Flip Wilson called in or stopped by (Paul and Yoko only called).


To raise extra money, auctions were started.  John auctioned off his stars and stripes, red white and blue socks for $50.  Later, he auctioned another pair of red ones for $50 again.  I painted a poster of the Yellow SUbmarine and characters for the auction.  John was just supposed to sign his name but he wrote, "To Ro, Luv John Lennon."  Now it's on my ceiling.

The rest of the weekend went along fantastic.  John was so great about everything.  He really went crazy on the phone.  "Hi this is John Lennon, send in your money" was one of his calmer remarks.  It was all fantastic!

Four months have passed since then and I still feel like I'm just waiting to see him.   That one little weekend seem to go so fast.  I still can't believe, I met John Lennon!