Two fans had a wonderful Christmas time in 1975

This story was written by Peggy Scott and was originally published in the January/February 1976 issue of The Write Thing.   I am pretty sure that I found one of the photographs that go along with the story in my files (I love it when that happens).   This story takes place on December 21, 1975, and was written the same day) 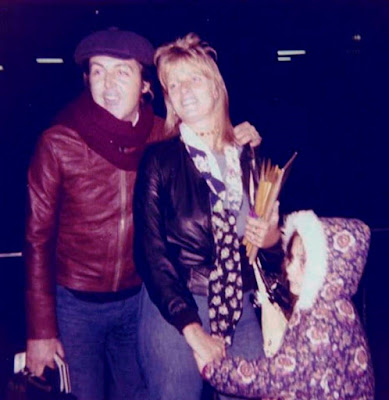 My one and only dream came true, I saw Paul McCartney today!  I went to the Eastman's with Vikie.  It was about 2:30 in the afternoon.  After walking around for a while, we went around the corner because we saw a Volkswagon, and went to check it out.   When we went back to the front of the building and who should be there putting things in the car but Paul himself.  It was a maroon station wagon.  We were approaching him from the back so we just walked up and said, "Hi Paul," and he said, "Hello."  I asked about the U.S. tour and Paul said it should be from March until May.  Linda said they'll probably hit New York in May.  I asked about her book of photos and she said it will be released here in the spring.  She was very friendly.   She came out a while after Paul and we were standing on the side away from Paul because he asked if we could wait a bit as he had so much stuff to pack in the car.  They were heading for the country.    The Eastmans went too.  Linda kissed her father good-bye and Paul told him, "Okay, we'll see you up there.  Have a safe trip."   Paul told us he'd seen John the night before (we hadn't even mentioned John) and that the baby was beautiful.  We also saw Mary, Heather, and Stella.  Mary and Stella had come running out of the building and Paul whistled and pointed for them to back inside.  Linda let us take a photo posing with her.  When I went to stand next o her she put her arm through mine and did the Wings sign.  Paul suggested I take a pic with Vikie's camera of the three of them and then vice versa.  He was very nice.  Some man had wanted him for a minute to say hi to this girl, and he excused himself.  He said, "Next time we'll see who the bum photographer is."  We wished them a Merry Christmas and they wished us one too.  We also got a kiss from them, or they let us kiss them, whatever.   Paul said, "Bye girls," before he got in the car.  I can't get over how natural it was meeting them.   Paul had on a long brown midi-coat and I think grey pants and a hat like in People magazine (the Jackie Coogan cap).  Linda came over and put it on his head, saying "Here's your hat, babe/"  She had on dungarees.  We were the only two fans there.